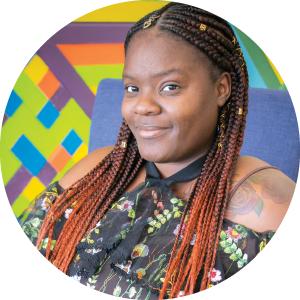 EMBRACING LIFE’S ‘ASSIGNMENTS’ TO HELP OTHERS

These days, Leontyne Evans has many roles—and each is connected to her past.

She is a life coach specializing in healthy relationships —and has overcome some unhealthy ones herself, including one that became abusive.

She is a navigator with the Greater Omaha Chamber, guiding individuals through challenges and troubled times—and has navigated through some metaphorical rough waters and dark skies of her own.

“I live in transparency,” Evans says. “For every person who thinks I overshare on Facebook or at speaking engagements, there are five other people who need that information. I pray that my story changes someone else’s, and my story can’t change someone else’s if I don’t share it.”

Evans’s story begins in Pine Bluff, Arkansas, where she was born. She moved to Omaha as a first-grader, and except for family visits and a brief return to Arkansas as a young adult, made Omaha her home.

Being sexually abused as a child was a trauma that “bled into adulthood,” she says.

“Not dealing with that trauma, not understanding what that was doing to me, made a very angry, hard-to-deal-with teenager. I ended up pregnant at 13 and had my son at 14,” she says, adding that feelings of ‘I don’t have anyone, I don’t need anyone, I’m just going to keep my secrets̕ permeated her psyche as a young adult. The isolation Evans felt contributed to her attachment to a dysfunctional five-year relationship with her son’s father and a subsequent codependent relationship that turned violent.

“I was in a very vulnerable state and I hadn’t dealt with my trauma, which allowed me to fall right back into another cycle of abuse,” she says. The first two years of the relationship were good, though she now recognizes they were a grooming period by her abuser.

“Then it turned ugly. But I was already in love at that point and I was longing for the person he used to be because I knew who he could be,” Evans says. “But it was too late. In one year I called the police on him 17 times.”

Alcohol contributed to her boyfriend’s rage and abusive actions, and although he was sometimes hauled away by the police and held in jail overnight, charges never stuck and he always found his way back to Evans.

The incarceration of her abuser was a relief, Evans says, and a chance to contemplate her life. Seeking insight, she decided to go into therapy and pursue an education.

“I didn’t understand how someone like me could fall into this situation. That’s how I ended up studying behavioral health and the cycle of unhealthy relationships, and I literally became obsessed. Everything I went through, I studied, to make it better.”

Evans earned a bachelor’s degree in behavioral science from Bellevue University. She became a trained mediator, a certified personal finance counselor, a certified life coach and a provisional licensed alcohol and drug counselor.

For four years, Evans facilitated domestic violence intervention classes. In 2017, she started The Evans Experience in response to limited post-crisis resources for survivors of domestic violence.

“I started The Evans Experience to educate, encourage and empower women to get out there and find themselves and really understand what true love could be like, to navigate their way to healthy relationships,” she says. What started as a group of seven women has expanded to an online-based group of 300 women who participate in their choice of activities, from girls’ nights out to financial planning presentations.

Her autobiographical book, Princeton Pike Road, was published the same year she began The Evans Experience, and tells her story of “going from victim to victorious.” This spring, already an active member of the organization’s speaker’s bureau, she became Survivors Rising’s first survivor engagement specialist. She programs events and initiatives to empower survivor voices and leadership.

“My role is to make sure survivors never feel alone and that they know there is someone going through this journey with them,” she says. “And once again, it’s all about educating, empowering and encouraging.”

Evans has also worked on survivor initiatives with Men Against Domestic Violence Action Coalition (MADVAC), the Women’s Center for Advancement (WCA) and the Women’s Fund. With support from the Women’s Fund, she’s working on a special initiative with four other women to address violence against Black women.

“We want to fill the gaps of the disparities of how Black survivors and Black victims are treated when it comes to domestic violence and sexual assault, and the resources that are out there for them compared to those for other races,” she says.

This spring, Evans began a new position with the Greater Omaha Chamber. “My position as a navigator is to be on site at the employer’s to help employees navigate through life while they’re at work. I’m like an on site life coach or social worker.”

She helps people find resources for everything from relationship counseling to support in maintaining freedom from substance addiction. Evans is assigned to Lozier Corporation, and the idea is for additional navigators to work with other employers as the program expands.

Her positive demeanor, high energy and easy laugh seem to belie her early struggles and the heavy issues she now helps others face. But she chooses to look forward.

“I always tell people, ‘Everyone has an assignment and there are certain situations and certain people you need to complete your assignment.’ This is my assignment. I was put on this earth to help people. I was assigned to these people. And unfortunately, those people that hurt me, they were part of my assignment,” she says.

At 31, Evans sees more good days ahead. She’s expecting her second book to come out by the end of the year. She’s working on her master’s in clinical counseling. And she’s been happily married to Victor Evans—a childhood friend she attended prom with and reconnected to in adulthood—for four years.

“I look forward to living my best life and going wherever life guides me,” Evans says. W

Tyne! I love You❣️❣️ See ya at the top my sister- let’s go! So proud of you, and all that you do.