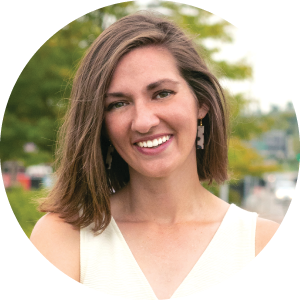 When Lauren Martin imagined her dream job, she didn’t initially see herself finding it in Omaha. Now she wouldn’t live anywhere else.
“I thought I just loved the music, but it turns out Maha became my family in Omaha.”

Martin’s journey to becoming Executive Director of Maha Music Festival began when she first recognized the impact music had on people. After attending a Guster concert put on by the University Program Council at the University of Nebraska-Lincoln, she knew she wanted to get involved.

“That was my first taste of realizing there was a group of students that had made that happen and that I could be a part of it,” she says.

Martin eagerly became the entertainment chair of the organization and helped plan events that showcased big-name artists such as Jason Mraz and Kathy Griffin.

“For me, my favorite thing to see is the audience reaction, not necessarily what the artist or performer is doing on stage,” Martin says. “Bringing people in on this shared experience is a very meaningful thing to me, and the University Program Council is what gave me that taste.”

Half way through her junior year, Martin switched her major to communication in hopes that it would support her goal of breaking into the music industry after graduation. That summer, she interned with the University Program Council and did a summer concert series where she got to coordinate some of the shows.

The experience she gained led to an internship with Saddle Creek Records, where she began to grasp the ways in which music touched people.

“I loved the power of music and I really recognized that,” she says.

After graduation, Martin moved to St. Louis for an internship with Live Nation. To her delight, leaving Omaha felt like a step in the right direction toward her career in music.

“I wanted to leave Omaha—that was driving me in everything I was doing,” Martin says. “I thought that having a job in music wasn’t possible here.”

Despite being offered a full-time position with Live Nation, her time in St. Louis was short-lived. With the 2008 recession hitting hard, Martin was forced to pack her bags less than a year after moving out of Nebraska.

At first, Martin hated the idea of coming back to Omaha and felt as though she had failed.

“I wondered when I’d leave again, but I also recognized I had opportunity here.”

Upon return, Martin worked in marketing for a local car dealership. While she felt grateful for the position at that stage in her career, her heart wasn’t invested in the work she was doing.

It was when she came across a friend making music videos in Omaha that Martin realized the music industry wasn’t as small here as she remembered.

“Wheels started turning in my head like, ‘Wait—there’s something going on here?” Martin says. “There were people doing things here that I cared about, and I realized that meant I could get involved with them.”

After starting a new job with the Omaha Community Foundation in 2009, Martin was contacted by the founder of Maha.

“One of the Founders reached out to the former student government president and said, ‘Hey we’re starting this music festival, who should we talk with to help us promote it?’”

Thanks to the help of her peer, Martin became a volunteer for the first Maha show in 2009.

“Every passion I pursued resulted in these incredible relationships with the people behind them. I was invested and I couldn’t imagine leaving.”

After six years of volunteering with Maha Music Festival, there was a dire need for staff who could dedicate themselves to the event.

It was then that Martin became the first full-time employee as Executive Director in 2015.

“I knew that nothing filled me more than Maha, and to me it’s the most beautiful mix of bringing people together and creating community in a space,” she says. “The environment you experience at Maha isn’t the national story everyone knows, but we have brilliant minds that are creating here.”

Since becoming a full-time employee with Maha, two other women have been hired as part of the team.

“In the society we work in, it’s pretty empowering to watch women be total badasses,” she says.

Due to the lack of work she did with women in past jobs, Martin originally thought she preferred working with men. However, her perspective shifted after experiencing women in leadership roles for the first time at the Omaha Community Foundation.

“I would choose women all day long in terms of understanding that we have to create opportunities for each other and encourage each other,” she says. “I’ve gotten to see that model best through environments that were led by women, so I’m always striving to improve and make sure that’s the kind of environment we are.”

For Martin, having two women headline Maha this year was the ‘cherry on top’ of the whole event.

“This was the first time that both Lizzo and Jenny Lewis had headlined a music festival, which we didn’t know when we booked them,” Martin says. “As a woman—for who they are, for what that is—it’s hard not to feel proud of that.”

One of her favorite highlights from Maha this year was watching the Omaha Girls Rock girls sing back up with Jenny Lewis.

“The fact that we had an artist that was excited about that and wanted to make it happen—those are the memories that I will always hold with me,” she says.

Moving forward, Martin stresses that the future of Maha isn’t about always having the biggest act, but to find ways to showcase the Omaha community.

That’s why in 2012, the Community Village was created at Maha to uplift nonprofits in the area. “We identified that there’s real value we could give by being a platform for others in the community,” Martin says.

Additionally, for the past three years, Maha has been focused on mental health and awareness. “Music is an outlet for people and a lot of artists are also open with this struggle,” Martin says. “Through the Community Village, we can bring together resources.”

Above all, Martin’s passion is empowering women, which is why organizations like Omaha Girls Rock and the Women’s Fund resonate with her so much personally.

“As a person living in Omaha, a lot of my friends have moved away,” Martin says. “But I feel like our arts and cultural organizations are a lot of what keeps people excited about Omaha and I want to stay here to be a part of that and help it grow.” W