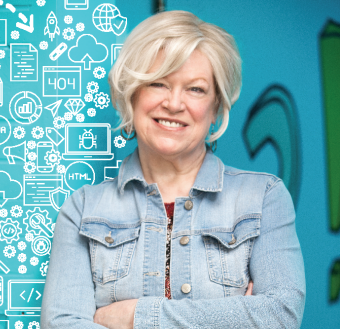 Lana Yager’s extensive two-fold career in tech and teaching grew out of independent learning and support from colleagues and mentors. A computer training enthusiast and recently retired Omaha Public Schools educator, Yager discovered her love for technology out of necessity in 1981, when she was raising two small children alone after escaping a difficult marriage.

“I didn’t have enough time or money to get a degree but I needed some skills,” she says. “My goal was to get a job that would pay more than $10,000 a year.

There was a time when I had a dollar to my name and a can of Campbell’s Soup in my cupboard.” Yager worked full time for minimum wage and studied business and computer science while caring for a 5-year-old and an infant. “I set my alarm for two hour naps at night so I could study,” she says. “My goal was to get Ds; that’s how beat down I was after that marriage,” she says.

“I came out of that marriage feeling as dumb and ugly as you could be, because when somebody tells you those things long enough, you start to believe it.” Yager surprised herself by earning straight As. “I did so well that first quarter that they let me take 21 hours the next quarter,” she says.

Yager taught herself to write a computer program for a cow/calf operation for a ranch in western Nebraska. As a result of that independent study, one of her instructors encouraged her to meet with Doug Perry, president and co-founder of Abacus—one of the first computer stores in Omaha. Valmont Industries had just merged with IBM on a deal to market personal computers to agricultural businesses. “He said, ‘Go talk to them, I bet they’ll give you a job.’So I did, and they did,” she recounts. The company name was Inacom and it was the springboard for a lucrative and successful career.

“I learned so much out of that,” she says. She computerized farms, lumber yards and utility companies. “I’d sit out in my car and read accounting books so I could figure out what they were talking about so I could computerize them,” she says. “I just dove in.” One opportunity led to the next over a 23-year career in technology. “I believe in working hard and I believe in preparing for opportunities for when they come, so that when those doors do open you’re ready to go.”

She also believes in self-directed study. “If I’m 100 years old I’ll still be learning something new. In the IT field, to succeed you have to be that kind of person. You can’t stop learning,” she says. “You can be an expert today but tomorrow you’ll be left in the dirt if you stop studying, because IT changes so quickly.”

In 2001 Yager was working as the director of management information systems at Sitel Corporation and was laid off. “Companies were downsizing, layoffs started and I bit the dust,” she says. “It’s like I went from the Empire State Building down and hit the concrete,” she says. “I thought I’d be out of work for like 20 minutes. I figured I could just go back to consulting, but nope. Everyone else was going through layoffs. All of my contacts were hanging on by their fingernails.

Yager went 18 months without solid work. “It was very humbling. It really shook my faith. I went from six figures to earning $13 an hour overnight,” she says. Every door seemed to be closed. “My wise grown son said to me, ‘Mom, you’ve always said that when your kids were grown you would walk away from this and go do something that really matters to you, and here you are beating at the door to get back in to what you said you would leave’,” she recalls.

“I never thought about being a teacher a day in my life, but I knew they were hiring teachers so I went to the College of Saint Mary while working and watching my grandson.” She completed a post-Bachelor’s of Science teacher training program at College of Saint Mary in 2004 to earn certification for secondary education, with endorsements in business and computer science. Her Bachelor of Science Degree was in business administration.

Career No. 2 began. She completed her student teaching at Boys Town and then took a job at Omaha Public Schools. She started teaching business classes at middle school for OPS, then English as a second language to young people ages 18 to 21 who were new to the U.S. and didn’t speak English. “The goal was to get them up and running with English to provide opportunities,” she says. “I absolutely loved it!”

Then, a position opened in the computer science department at Omaha South High School. OPS hired Yager and another teacher to develop the school’s computer science program. “He and I grew that program in four years,” she says, bringing the offerings from only one class to 14, with each of them teaching seven different classes.

One class Yager is particularly proud to have implemented is an all-girls computer programming class. “When girls figure out that they have brains between their ears, they make wiser life decisions,” she says. “They don’t put up with some of the stuff that they may put up with otherwise,” she says. “It builds confidence.”

Programming uses logic to solve problems and it’s really hard, she adds. “I tell my students, ‘One minute you’re going to hate this and wonder why you’re studying this and you’ll say that you’ll never do this another day, and then you’ll figure it out and it’s the greatest thing you’ve ever done!’ They apply that to life.

I’ve watched girls go on to UNO who would‘ve never imagined they could study computer science, let alone go to the university for it. It’s incredible.” Yager retired from teaching this past school year but has not stopped developing. She’s putting together curriculum for teachers to learn how to teach and play with new technology. And she wants to learn how to work with augmented reality to develop technology that will help improve literacy.

Over the years, Yager persevered and pushed past obstacles in her personal life, technical career and as a teacher. “I couldn’t have done it without a lot of people along the way that are there for you—good family, good friends and good bosses. The majority of my bosses have been wonderful.” She says she believes that she reflects this in her own teaching. “I think I’m a better mentor and motivator sometimes than I am a teacher. I think it’s my job to help open doors and help provide opportunities, because that’s what people have always done for me.” W

Congrats grandma!!!!! This is amazing and I love you so very much!!!

I love you Grandma!!! CONGRATS!!

Lana was the mentor that changed the life of my son. He was a difficult student who was not confident nor cooperative when they first met but Ms. Yager never gave up on him, she encouraged and motivated him to change his outlook and succeed. He is now in a high level tech field and while only a year out of high school qualified to train with others who have master’s degrees.

Thanks Lana, we are forever grateful!