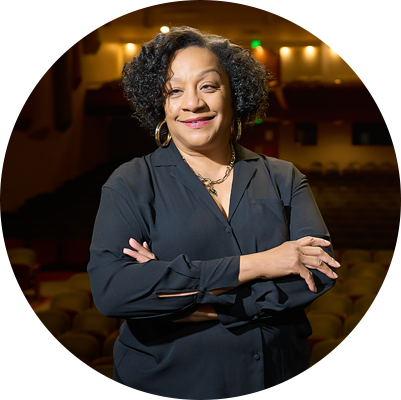 Ministry of the Arts: Leaving Theater and the World a Better Place

“As an audience member, the first show I saw that really sent me was CATS,” Tyree says. “It just moved me, and it went beyond the music. It was the artistry of the actors and dancers, the dedication, preparation and love of theater that went into it.”

Tyree, who was born and raised in Omaha, continues to lay the groundwork for fellow audience members and castmates to feel those incredible, goosebump-inducing moments that come from live theater. These days, in addition to turning in skilled performances and helming fantastic productions of her own, she serves as Director of Inclusion and Community Engagement at the Omaha Community Playhouse.

An award-winning, quadruple threat actor/singer/director/producer who is also dubbed “Omaha’s Own Queen of Soul,” Tyree first journeyed into performing arts at age 13 when she joined the Morning Star Baptist Church choir. She’s still a member of the congregation, although she’s gone on to bring her talents to many other stages.

By age 15, she was singing in the choir at Tech High School. Jim Eisenhardt, then Tech’s theater director, heard Tyree sing and suggested she audition for an upcoming production of The Wiz. She got the role of Dorothy and continued to “ease on down the road” to a career in performing arts.

“[The Wiz] is when the bug bit, and I just never stopped,” Tyree says, with a bright smile.

By age 19, Tyree joined the cast in a Center Stage Theater production of Ain’t Misbehavin’ that entered a community theater competition. She and her castmates competed at state, regional, national, and even international levels—ultimately taking the top prize.

“That was the best choice I ever made … we went on to win internationals in Toyama, Japan,” Tyree says. “It was life-changing to have those experiences and work with those amazing ensemble members. Then to have the whole city rallying behind you—people were at the airport when we left and again when we came back. It demonstrated to me the impact theater has on people’s lives, and how music and artistry really are a universal language.”

“The Center Stage was like home,” Tyree says. “That’s where BIPOC and Black artists could go do shows, because there weren’t that many opportunities for us citywide.”

Audiences, casts and theater organizations are more aware than ever that a significant part of creating theatrical magic that fires on all cylinders is creating diverse, inclusive, equitable, accessible spaces for all. They know that when putting on plays, institutions must welcome everyone to come play—whether as an actor, staff or audience member.

In her role at the Omaha Community Playhouse, Tyree works to instill DEIA (diversity, equity, inclusion, and accessibility) values throughout the organization.

“My ultimate hope is that one day my position won’t be needed,” she says. “I don’t know if that will happen in my lifetime, but the ultimate goal for the work we’ve poured into creating our DEIA strategic plan is that it becomes such a part of the culture it just happens organically.”

Tyree, who started her full-time role at the Playhouse in April 2021, notes that the theater holds a special place in her heart. She says she might not have accepted a similar job offer from just any organization. Since 2014 when she launched Kathy Tyree Productions, she’d happily been a full-time working artist, but the mission called to her enough to take up this particular 9-to-5 gig.

“I’ve had a relationship with the Playhouse for 30-plus years. It’s one of the first stages I performed on and it’s given me a lot,” Tyree says. “When I was invited to come on staff, it wasn’t a hard decision. Honestly, I would not have said yes to just any organization, but I knew the spirit and hearts of the individuals here. I knew they were sincere in wanting to do this work. From day one, the staff, board, everybody has been all in, and the fruits of that labor and intention really are starting to demonstrate themselves.”

For example, when Tyree held auditions for Dreamgirls, a March 2023 Playhouse production she’s directing, there was a huge turnout, and a majority were local talents she’d never seen before.

“That shows people are feeling this is a safe, comfortable, welcoming space where they can come and perform,” Tyree says. “People should understand that when you walk in these doors, everyone is welcome. Regardless of your race, gender, ability, accessibility or sensory needs. This is what we do here. And there’s sincere and true evidence of that every day, in every production, and in every audience.”

Tyree says she gets goosebumps when she hears first-hand accounts of audience members and actors who’ve been intentionally accommodated or welcomed despite a disability or other marginalized identity.

“I’m getting more and more of those types of stories, about how people just felt safe and cared for here,” Tyree says. “That shows the commitment of the staff. Anything I ask, anything I need support in, they’re there. They’ve done the work—going through training, having very uncomfortable, difficult conversations. It’s a process and a journey. Now it’s just becoming the permanent culture here.” From personal stories to more inclusive casts, to more diverse show selections and beyond, Tyree is elated to see more automatic intentionality at the Playhouse.

“The first thought is to be inclusive now, as opposed to having to have a meeting, sit down, and check off boxes,” she says. “The Playhouse is well on its way, but I also hope the community—not just the north Omaha community, but the entire Omaha community, including south, east, west, everyone—will come here and understand the mission of the Playhouse.”

Tyree is quick to acknowledge DEIA work is never-ending, and that even with progress organizations should still work to avoid complacency.

“I routinely say, ‘There’s not a switch you just flip.’ You have to be committed. You have to be consistent. It has to become an organizational behavior, then it will become a part of the culture,” she says. “We can’t relax [and let things slide] because, like anything else in life, once you start to do that you find yourself back at square one. And this is too much work to go back to square one.”

Luckily for Omaha audiences, Tyree says her Playhouse position doesn’t mean she’ll stop singing, acting, producing or directing. She still does all of the above, as well as workshops and trainings, throughout the community.

“When we talked about me coming on staff, that was one of the first things we addressed,” Tyree says. “I’ve poured 40-plus years into my [performing arts] career, so it couldn’t go on the back burner.”

For all her incredible work in the arts, it’s important to note that this apple did not fall far from the tree. And that mighty oak was Tyree’s mother, Shirley, who passed away in 2021. To honor her legacy, plans for the Shirley Tyree Theater Project are currently underway at The Union for Contemporary Arts. The project aims to preserve a historic north Omaha building, create a gathering space, and expand capacity for the Union’s performing arts programming, which began in 2016.

“My family is so honored,” Tyree says. “She loved her community, north Omaha, the theater. She was everybody’s mama and poured tirelessly into her community. Shortly after she passed, so many people came to me and shared stories of how she had poured into their lives and impacted them—things we never knew. That’s just how my mother was. She did it and she didn’t boast or brag about it.”

Similarly, Tyree makes clear that her work as a performer and in DEIA at the Playhouse is merely part of her larger mission in life.

“The arts are my ministry,” she says. “I have a very personal relationship [with God] and recognize there’s a calling in my life: to do this work, pour into other individuals, and be a gift and a blessing. I always want people to leave me better than they met me. [Whether] I encounter you in the grocery store, on the stage, in the audience…I pray every morning that everyone I encounter is blessed and that I do or say something to make [life] a little bit better for someone. I’m not a perfect person, but I try to act right, be right, and be a blessing to people. I got that from my mama.”