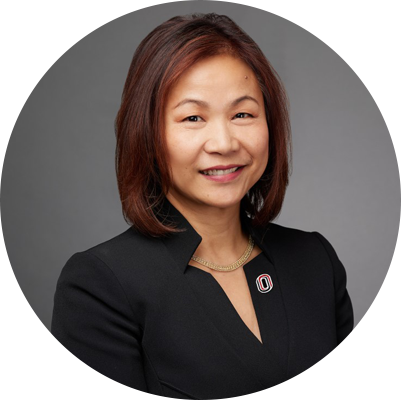 From Hong Kong to Omaha: A Journey of Gratitude, Ambition and Service

Joanne Li, Ph.D. is truly in her element when she is in front of a crowd, speaking passionately about the need for opportunity and support for the students she serves. As the University of Nebraska Omaha’s (UNO) 16th Chancellor, Li revels in her ability to be a champion for the students, faculty and staff she serves. At the heart of her unceasing mission to build a brighter future is her earnest desire to pay forward the kindnesses once shown to her.

Originally from Hong Kong, Li knew at a young age that she wanted to be three things, all at once: a kindergarten teacher, a florist and a coffee shop owner. While at first glance these may seem like completely different journeys, they share a common theme: She knew she wanted to bring guidance, beauty and inclusion to the world. This likely stems from the example her parents set.

“My mother and father worked long hours when I was young, and I spent a lot of time there with them. They treated everyone there like part of the family.” She remembers fondly the holidays with her parents, and how they “taught us that, no matter what, you always show thanks to everyone who helps you. We would go around to each worker, together, and personally thank everyone, because they were the ones who helped put food onto our table.”

This philosophy later guided Li in her own journey, across the ocean to the United States, where she pursued her B.S. and later Ph.D. in Finance from Florida State University (FSU).

As both an international and a first-generation student, Li may have initially felt like an outsider, but she says the warmth and guidance she received from mentors during her time as a student echoed the same feeling of gratitude her parents originally fostered. It also instilled within her a desire to remain in the United States after completing her studies so that she could guide others and pay forward the kindnesses she had received.

Thanks to her own experiences as a student, Li views higher education as a transformative experience. And so, when given the chance she leaped toward the fulfillment of one of her earliest desires: to teach. It may not have been kindergarten, but her position as university faculty at institutions such as Loyola University, Towson University, Wright State University and Florida International University gave her the chance to inspire a future generation of students to believe in themselves and follow their own dreams.

Her desire to guide is matched by her ambition and scope. In 2012 she stepped into the role of business dean, where she was then able to guide not only student-focused initiatives, but help her colleagues grow as well. She worked hard, putting in long hours, and her efforts were noticed. Prior to assuming the role of UNO’s chancellor, Li’s time as dean of the Florida International University (FIU) College of Business saw the college’s graduation rate increase from 29 percent to 70 percent, an average 20% year-over-year growth in its Chapman Graduate School, and a growth in reserves from $3 million when she became dean to $18 million at the time of her departure.

In addition to her accomplishments as an administrator in higher education, Li is also a highly engaged leader and scholar who lends her expertise and experience to a wide array of causes and organizations, from CNBC’s Financial Wellness Council to the Higher Learning Commission’s (HLC) Board of Trustees.

To say she has been prolific in her career is an understatement. She credits her professional growth to advice from a former university president, when he told her that she needed “to look up” even while securing the successes of the moment, and to always be aware of the potential for greater good, greater achievement and the potential for her own advancement.

Li’s journey has been one of pathfinding and cutting new trails, and so it is appropriate that she should be the first woman of color to serve in her position as the UNO Chancellor, let alone the first Asian-American in the history of the University of Nebraska System to hold an executive leadership role. And while she is a fierce advocate for those in her care, she approaches the role with humility and grace.

“I never thought of myself as the first Asian-American or first woman of color to be in my position,” she says. “But when I first arrived in Omaha, a young couple approached me. The woman was crying and told me how touched she was to see an Asian American as chancellor. My appointment had meaning. It gives hope, and representation, to many people. It’s humbling, especially since as a little girl I never imagined college would be my future, let alone getting my Ph.D., or being where I am now.”

To this day Li approaches every interaction with the belief that one of the most powerful tools in her collection is an open mind and heart. “When I first became a professor, my dad reminded me that in Chinese the verb ‘to teach’ is formed by joining the characters ‘to teach’ and ‘to learn.’ He gave me the best career advice: to teach other people requires you to learn at the same time. I’m humbled by my teachers as they share their expertise and talents and help me to become smarter and better able to perform in my responsibilities to the community.”