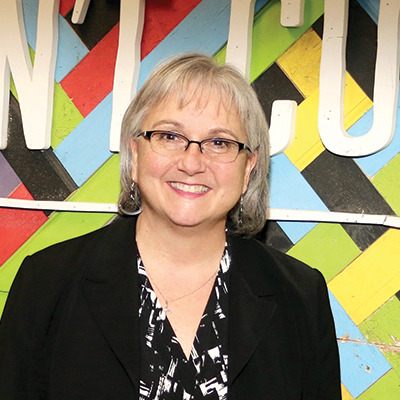 Move Your Own Needle and Make Things Happen

Lynda Shafer, Director of Leadership Development with the Greater Omaha Chamber of Commerce

Each of us is on our own path, seeking the best life possible. Yet who doesn’t have room for improvement? Whether you know what you want and are executing a plan to get it, or are just waking up to the idea that you can get more out of life, it never hurts to consult the experts.

Advice from local leaders can help you move your professional life forward with intention. Often, it’s just a matter of having the courage to take that first step.

Lynda Shafer, director of leadership development with the Greater Omaha Chamber of Commerce, recently shared the following quote by Martin Luther King, Jr., on her Facebook wall: “Faith is taking the first step, even when you don’t see the whole staircase.” Shafer says that as women, we want to at least be able to see the first flight, if not the whole staircase. “Then sometimes we just have to give ourselves permission to take the first step.”

She says many women feel that if they don’t have the right title or letters behind their name, they can’t lead, because they won’t be respected or acknowledged as a leader. “We need to step out and acknowledge that we’re not perfect. Take the failures when they come, learn from them and then get back in the ring,” Shafer says.

Shafer looks for people who aren’t content to be average. “That’s the thing about Omaha. Omaha isn’t content. There’s always somebody who has a dream, a vision. Those are the kinds of people we’re trying to grab for Leadership Omaha to give them even more awareness,” Shafer says.

“The huge benefit of being in Leadership Omaha is that you’re surrounded with this cohort of people who are passionate about what’s going on in this community and want desperately to give back and to have an impact.” Have a Plan & Chart Your Course

Nebraska Public Service Commissioner Crystal Rhoades has a straightforward plan when it comes to achieving a leadership goal. “I set a goal and I work it until it’s done.” That singular vision worked well for her when she ran for a position on the Metropolitan Community College Board of Governors.

She had never planned to run for public office until she was asked by a colleague to run. She remembers the day clearly. She was standing in an airport, talking on her cell phone. “I didn’t even think about it. I just said ‘yes.’ It was really my first run at things,” Rhoades says.

Once Rhoades was elected, it was clear to her that she’d made the right decision. “It was what I wanted to do.”

Now Rhoades helps to ensure the public safety of all Nebraskans—from regulating grain elevators to handling transportation issues to overseeing the telecommunications infrastructure. “These are just things that go on in the background that people don’t really think about, but they’re critically important—both economically and from a safety perspective.”

Rhoades says that when it comes to taking on a leadership role, women often need to be invited first. “I was invited. In fact, both times I ran for office, I was invited to do that. So I understand how overwhelming that can be.”

She recently shared her election experiences at the Women’s Fund’s Ready to Run program—a series of seminars to give women insight into the process of running for office. “I want to be supportive of other women in helping them to get where they are going.”

Rhoades has won several community awards for her volunteer efforts through the years. “I’m always getting into something, whether it’s park cleanups, graffiti cleanups, community gardens or a mural project. I like to be engaged. I like to help people and I have a really hard time saying ‘no.’”

She regularly attends neighborhood association meetings as way to maintain connectivity to the people that she represents. “I think that’s a really important part of leadership. If you don’t show up, if you’re not engaged, if you’re not listening to what people are concerned about, if you’re not helping them move toward goals, it’s very easy to become very insulated and not really fully understand what it is that people want and need,” she says.

She is thankful for the mentorship she received from former Nebraska Public Service Commissioner Anne Boyle. “Anne has been both a wonderful friend and a tremendous mentor to me. She understands what it’s like to be the only woman at the table and understands the dynamics that go into that. She has been very helpful in helping me to not become overwhelmed or discouraged.”

Rhoades encourages anyone seeking office to reach out to other elected officials—including herself. “They should call me. I’d be happy to have a cup of coffee with them and talk to them and figure out what their interests are and help them get started.”

She adds that reaching out to people who have gone through the election process is the best way to plot your roadmap. “We’ve all been there, where it’s our very first campaign. How do we structure this? Which office do we want to pursue? What does that look like in terms of the landscape and my ability to be successful in that environment?”

“I think there’s a willingness on the part of other elected officials to recruit people, to mentor them, to help them become successful, to teach what they know,” Rhoades says. Shafer says simple encouragement is an amazing gift women can give to each other. “Not just to say, ‘You’re awesome,’ but ‘Here’s what I see in you that makes you awesome.’”

In other words, find your own support system of friends and colleagues who share your vision and make them your world. Stay in touch. Text often. Bounce ideas off of each other.”

The women who started the Omaha chapter of the New Leaders Council are a good example of this.

Meg Mandy, NLC chapter founder and advisory board director, and Noelle Obermeyer, NLC chapter co-director, met in college at the University of Nebraska Omaha through the group College Democrats. The duo has been working together for more than 10 years in the political sector, and each has a full-time job outside of the NLC chapter.

“I think it’s a labor of love though, too, and it makes it easier because we’re friends. When we’re having coffee or up late drinking wine and we are talking about things that are going on in the state that we don’t like, we are able to turn those conversations into positive things that can be put into action,” says Obermeyer, who is also a Douglas County assistant public defender.

Mandy returned to Omaha after living in San Diego, where she served as the political director of the Democratic Party. She immediately saw a political landscape in Omaha that needed change. “So that’s why I decided to start a chapter here,” she says.

The New Leaders Council is in its second year of hosting the institute, where they train 20 Fellows each year on leadership over a period of five months.

“I think that’s a lot of what fellows take away from the institute—a network of people who are committed to seeing you succeed and want to spend their extra time helping you achieve your goals. And that’s an incredible thing to have,” Mandy says.

Obermeyer says the NLC is fulfilling a need in the Omaha community. “There’s obviously a real need for young leaders to step up in our community and across the state, at all levels of participation—from a neighborhood association to the top of our tickets, as far as campaigns and elections go. We need good leaders in business and corporations,” she says.

Mandy encourages those who are seeking to better themselves and their community to apply for the New Leaders Council. “The change it has had in the people who have gone through the institute is really awesome.” She describes one enrollee who saw a need for change in her school district but didn’t know how to be involved in her community and how to effect change. “Going through the institute gives you those tools. Whether it’s saving a school or recycling in your workplace, it prepares you.”

Each Fellow begins his or her own capstone project during their time with the institute. Past Fellow’s capstone projects have included a program that helps military veterans in the Omaha area attend code school. Another project involved doing community outreach to find better-skilled workers for a specific industry in need. Another Fellow worked on the Safe Space Nebraska Program that works with clubs, bars and venues to fight the epidemic of harassment and assault in nightlife establishments.

“New Leader’s Council has a slogan of ‘people, progress and results.’ I think that is absolutely in play in Omaha,” Obermeyer says.

Once you identify your support group, it’s necessary to go outside that group to really effect change. In order to gain the funding necessary to get NLC off the ground and running, Obermeyer had to expand her circle.

“In order to…infuse this community with young progressive leaders who are ready and willing to go out and make a difference in their communities, we had to get larger than our communities so we weren’t just talking to ourselves anymore.” Be Present and Aware of Your Surroundings

She says that leading a life with intention means you are careful and purposeful in what you do and the decisions you make. “You don’t simply drift through life; you live with purpose and intentionality.”

She advises paying attention to your surroundings. “My advice is to simply listen. Great leaders understand that learning comes from sharing ideas, opinions and thoughts through conversations. Therefore, it is very important to be fully engaged in listening. When someone is truly being listened to they feel valued, understood and appreciated. Great leaders practice this and understand the power behind active listening,” McLaughlin says.

She says the leadership programs ICAN offers are very unique. “We really work with soft-skills leadership training. We look at communication skills. We look at emotional intelligence. We look at how you put successful teams together. So much of it is about conversation. It’s not how many projects you can take on, or how fast you can type.”

Everyone’s journey through leadership is different, and filled with hard work, bravery and dedication. It can all be made possible by taking that first step. W

It’s nice to read about such talented, accomplished women. I am so proud to know a few of these remarkable ladies. Lisa