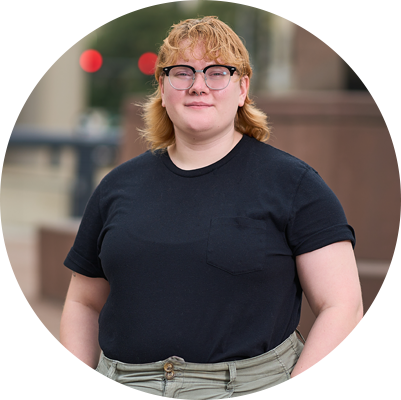 It’s common knowledge that private citizens elect representatives to make decisions on their behalf at all levels of government. The harder part of civic engagement, however, is in the details, like finding out how to track pending decisions, learning how to reach elected officials, and determining effective ways to influence policymakers’ actions from budget allocation to enacting laws. An organization called Strongly Worded Letters helps Omahans be more involved by providing information and online tools that makes activism accessible to anyone.

“Our work is really education-focused and our goal is about putting the power in people’s hands and empowering people to feel like they can make their voice heard on different issues that matter to them, specifically in Omaha.”

Johnny Redd, who serves as SWL’s communication manager, says the organization has helped to bring clarity around these bureaucratic, intimidating processes to ordinary citizens. “When we first started, I knew next to nothing about City Council or the State Legislature, so that just goes to show how good Gab is at what they do. I hope we can expand our work beyond direct civic engagement some day and tap into community organizing on a larger scale, because there’s only so much the city will do. To me, the biggest goal is to help build community with people who care about the future of where they live. It can be really hard to try to advocate on your own, and the best feeling to me is being within a group with a united goal and the energy that it brings.”

Rima started the progenitor to SWL as a college student in 2018. “I started an in-person club that met at a coffee shop; a letter-writing club. Every week I would come prepared with the topic of the month, and different decisions that were being made around that topic at the local and federal level. And then I would write letters to elected officials about those issues and encourage others to do the same.”

When Rima says “letter-writing,” they mean in the traditional sense. “The original iteration began with handwritten letters because I had read somewhere in a thread by a congressional staffer of some kind that emails weren’t necessarily reaching elected officials in the same way a phone call or a letter was. It said that an email was seen as something anyone could shoot off in five minutes and if you wanted to make it seem like you cared about something, the best thing you could do was write a handwritten letter,” Rima explains. “Psychologically, there is something about seeing someone’s handwriting as being very personal.”

In 2020, the COVID-19 pandemic paused the group’s in-person meeting. It also provided time for Rima to reflect on what could happen next.

“I had time to think about it and reimagine the project in a digital space,” they explain. “And that’s when I brought on Johnny as a creative partner.”

“Gab decided SWL could have more reach if it moved to a digital space,” Redd says. “Gab and I had previously been coworkers at a local business and became pretty close friends, so they reached out and asked if I could develop a visual brand identity for the project. Eventually I became just as attached to the project as they were, and it became an equal partnership.”

No issues are off-limits, but SWL does have general areas of interest at the city level, including housing justice, mobility justice and racial justice, Rima says. The group also sticks to issues involving Omaha proper and Omaha city government rather than nearby or suburban communities such as Bellevue, Ralston, Papillion and La Vista.

“We tend to follow our audience, so if people ask us about something, we want to be able to try to provide resources for the things people are interested in advocating about. We try to focus on Omaha; sometimes we focus on state issues,” Rima says. “We really try to focus on a city level because Johnny and I both truly believe that where you’re going to see the change most directly affect your life is at a city level.”

Strongly Worded Letters is a digital space where people can stay up to date on civic engagement in Omaha, at whatever pace or level they prefer, the team says. “We care a lot about transparency and accountability from local elected officials, especially in regards to budget issues and decision-making,” Redd says. “Issues like the city budget and the Omaha Public Library situation really illustrate why people need to have more access to the decision-making process, and that’s what we aim to shine a light on.”

SWL also provides information on the nature of advocacy work itself, Rima says, because advocates can become disheartened when their efforts don’t easily produce results.

Rima and Redd, both twentysomethings, say SWL can be useful to anyone who wants to be more engaged, but the audience tends to skew fairly young.

“When I was creating the brand identity for this project, I sat down with Gab to establish the audience they wanted to reach and it can be split into two distinct groups,” Redd said. “The first group is made up of people ranging from their mid- to late-20s who are already somewhat familiar and involved with the civic engagement process, looking for moral support and more resources. The second group is made up of younger people, high school to college-aged, who are beginning their journey into civic engagement and looking for places to start. We try to balance our content to be friendly to both groups.”

Rima says that many of their most-engaged members tend to be fairly young. “We have found that to be very exciting. We’ve hosted a few workshops now and pretty much all of our in-person events have been attended by teenagers and people in their early 20s.”

Rima and Redd say they have several ideas brewing for the future of SWL, from sharing more longer-form content to launching a podcast to hosting six-week classes on civic engagement and organizing.

“My ultimate goals are to further our reach and depth of education. I’d like to get more into doing classes and workshops; we’ve done a few in the past and that’s some of our favorite work,” Rima says.

Redd adds that this duo could always use some help. “Strongly Worded Letters is a two-person show right now, so if people are interested in offering their skills, we’d love to chat.”

“There is not one specific formula for success,” Peck says. “Challenges never end. Opportunities never end. We need to try to put ourselves in everyone’s shoes.”