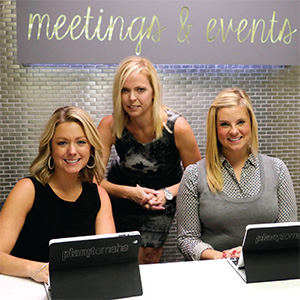 Women at Work: planitomaha Manages the Good Times for Business

When your job is event planning, you have to be prepared for something to go wrong, because in many cases, it does.

But it’s how you respond to the foibles and snafus that make a successful event planner. Renee Black, principal and senior event producer of planitomaha, a company that produces events and high-level meetings for several Fortune 500 companies, says her staff of talented women know they aren’t allowed to say “We can’t do this” when the pressure is on.

“It is all about putting the pieces of the puzzle together and trying to make something work,” Black says. “I always call event planning another form of crisis management.”

“People talk about having a Plan B. Here I say, ‘What’s our Plan Z?’ You have to be resilient and quick enough on your feet to handle whatever is thrown at you.”

Black says the most stressful event of her career turned into an incredible success story for her company. Picture this: A transformer blows the day of a large event PlanitOmaha is organizing at the CenturyLink Center. It is negative ten degrees outside, and inside, the convention center is freezing. “We decorated by flashlight and floodlight,” Black says.

They also had no working ovens to cook the food. Nearby Hilton Omaha graciously offered use of their ovens and delivered the meals via skywalk. The trans-former was fixed 30 minutes before the event started, and the whole thing came together at the last minute. Guests were none the wiser.

“It was just another story of the show must go on,” Black says. PlanitOmaha has been putting on shows for the past 18 years. Black started the company with her partner, Lesley Brandt, principal and senior event pro-ducer. Black knew Brandt because they both had mar-keting jobs in Omaha. They also both loved planning events. “It was just a meeting of the minds and we de-cided there’s a huge need in Omaha. There aren’t many folks doing this kind of service,” Black says.

Black is proud to be part of a women-owned, women-run business. “I very much love to take young women and put them on a career path and empower them and lead them and enable them to take care of themselves and their families,” she says.

The planitomaha team does about 30 percent of their business outside of Omaha, representing clients around the country. “A lot of our clients are incredibly apprecia-tive of the fact that we’re able to bring some fresh, inno-vative ideas because we’ve experienced some different things in some different markets, and we’ve been able to bring it here for them to utilize.”

She says one thing that sets planitomaha apart is the way they strive to understand the client’s goals. “We re-ally try to embed ourselves and try to be an extension of their team.”

Black believes there is always something to learn and, like a sponge, she likes to absorb as much as she can from whatever situation she is involved in. She draws inspiration from her team of 13 women because they are constantly trying to figure out how to get better at what they do. “We are the experts…but we can still get better,” she says.

Planitomaha has produced the Women’s Fund of Omaha’s Annual Fall Luncheon for the past three years as a pro bono service. Black says her entire team ral-lies around planning the event because she believes the Women’s Fund’s initiatives are in step with PlanitOma-ha’s ideals. “I think the Women’s Fund is second to none in what they do for women and girls in Omaha.”