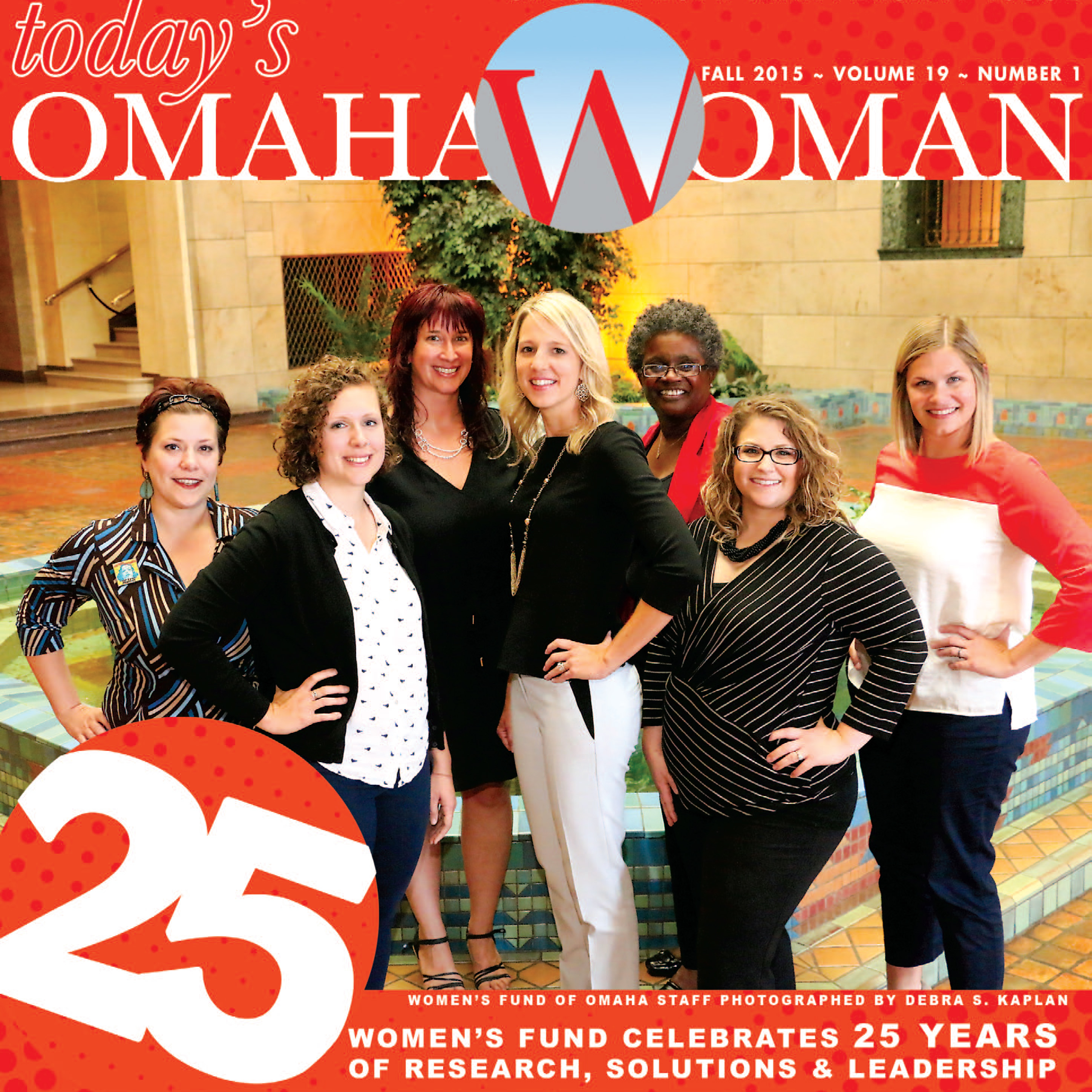 Twenty five years ago, the landscape in Omaha was very different for women and girls. Sure, there were some nonprofits serving these groups—the YWCA, Girls Club and Girl Scouts among them. But for women in particular, no one was really moving the needle on the larger, more long-term issues they were facing: Domestic Violence. Pay Equity. Leadership Training. Economic Self-Sufficiency. Sky-Rocketing Child Care Costs. Work-Family Balance. And so much more.

“The Ford Foundation was offering a $150,000 grant to organizations trying to set up a Women’s Fund, and the Omaha Community Foundation thought this was a good idea for our city,” says Gail Walling Yanney, one of the organization’s key founders. “So I called my friends together, and some expressed interest in getting this going. We recruited Mary Heng-Braun to be the first executive director, and the rest is history.”

This small group of visionary women recognized both the need for, and potential power of, an organization focused exclusively on a wide range of women’s issues. They began raising money to match the $150,000 Ford grant, and succeeded in establishing the Women’s Fund. The organization’s first research report, “How Are Women Doing in Omaha?” was published in 1994. It would be the first of 20 research reports conducted over the next 25 years.

Yet Heng-Braun says that at first, reception to the idea of starting a Women’s Fund was lukewarm in some circles. “It was a struggle initially,” she says. “Our efforts were seen by some nonprofits as competition, because women’s organizations at that time were inherently underfunded. Resources were scarce.”Of course, within a few short years, the Women’s Fund would help to not only “increase the size of the pie,” Heng-Braun says, but also support other women- and girl-serving nonprofits both financially through grants, and with reliable research to validate their important work.

How did this organization—which was initially housed with the Omaha Community Foundation and began with the simple mission of improving the lives of women and girls—grow to become the local collective voice and primary champion of informed and innovative change for the female gender?

According to Yanney and Heng-Braun, it comes down to leadership and focus. “The dedication of a consistently solid board of directors—coupled with a crystal clear mission—deserve the credit,” Heng-Braun says. “I don’t believe this organization has ever really lost focus.”

Dianne Lozier, who served on the board in its earliest years, agrees. “This was not just any group of wom-en, nor was it a wholly homogenous group. They were older and younger; Christian, non-Christian and atheist; white, black and Latino; Republicans, Democrats and a-politicals; doctors, lawyers, educators, business professionals, retirees and stay-at-home moms.”

This diversity was intentional, Lozier says, yet “diversity of membership, while truly valuable, does not always make for a comfortable process. In the early years the group frequently had to agree to disagree on particular topics—some of which were controversial—in order to move forward.”

Yet the organization’s mission was also solidified during that time: to identify issues through research, to fund solutions through grant giving, and to lead change through advocacy. In an effort to further the mission’s reach, the Women’s Fund founded Today’s Omaha Woman magazine in 1997.

About 10 years after the organization’s inception—after Heng-Braun had retired and the organization struggled briefly to find a new leader—Ellie Archer was hired as executive director. Under her 11-year tenure, the Women’s Fund published 11 research studies, grew the endowment from $1.6 million to more than $6 million, and started programs such as Ready to Run, Talk of the Town, Circles and Ready to Serve. The first Women’s Fund luncheon was held during Archer’s first year, and the effort to reduce STDs in Douglas County, which continues today, began shortly thereafter.

For Archer, who started just as the Women’s Fund became its own 501(c)(3)—moving out from the shelter of the Omaha Community Foundation—the obstacles were many. “When I came on, it was a very challenging time in terms of the national scene—I started two months before 9/11,” Archer says. “Fundraising became very difficult, so a decision was made that we would encourage people to give to direct service providers during the recession.”

And yet despite this and other challenges, the Women’s Fund continued to grow, giving increasingly larger grants to local nonprofits, conducting more in-depth research and raising continued awareness about women’s issues. “The neat thing about the Women’s Fund is that over the years I really felt everyone involved was genuinely interested in our cause and mission,” Archer says. “They weren’t there to advance themselves personally. They were there to advance women in our community, and shared a real camaraderie. That’s why we were ultimately successful.”

Archer retired three years ago, and the Women’s Fund hired Michelle Zych, a young leader who by all accounts has infused new energy into the organization. “Ellie set it up for Michelle, and Michelle is dynamite,” Heng-Braun says. “It’s better today than I ever dreamed—what a super feeling that is.”

Yanney wholeheartedly agrees. “We have the energy now that we had 25 years ago, because the next generation is out there doing it like we did, back when we started,” she says, adding the work of the Women’s Fund is still very necessary. “Women’s issues are still the world’s issues,” she says.

Zych says that she and other women of her generation are products of the work of the Women’s Fund. “Thanks to the dedication of our founders, we are able to stand on their shoulders to keep responding to the needs of women and girls in our community,” she says.

The future looks bright, Zych says, because the Women’s Fund continues to seek bold solutions to the tough issues that impact the ability of women and girls to reach their full potential. “Our strength lies in our ability to convene partners to develop and implement collective strategies that actually improve the lives of women and girls. We will continue to rely on research to ensure that our solutions are best practice-informed and culturally competent. We will continue to fund organizations that work directly with women and girls. We will use our position as a respected institution to advocate for policy solutions. And we will build the next generation of leaders to ensure that this important work continues.” Early images of the women who helped build the Women’s Fund of Omaha.

To date, the Women’s Fund has awarded 100-plus local women- and girls-serving agencies $4.5 million in grants. Its endowment has grown to nearly $10 million, and it will release its 21st research report in 2016.

But the real question is, has it improved the lives of women and girls in the Omaha community, as originally intended? According to its founders and community leaders, the answer is a resounding yes.

“When we used to go talk to CEOs about the Women’s Fund or women’s issues, they didn’t take us seriously,” Yanney says. “I think they do now.”

The Women’s Fund has established itself as a credible leader, educator and advocate on issues facing women and girls, Lozier says. “Many elements played a role in its growth and development—grit, persever-ance, even plain old stubbornness—but we always focused on the overwhelming desire to make a difference. Twenty five years later, it is a very powerful and respected institution. The Women’s Fund continues to identify issues, fund solutions and lead change.”

Although the Women’s Fund has certainly surpassed the dreams of its founders, Heng-Braun says they never expected to see it reach its pinnacle—and they still haven’t. “It’s a moving target,” she says. “The vision was that none of those who set it up would see its true fruits in our lifetime. It’s like planting an acorn to grow an oak tree—it continues to grow and live on long after you’ve gone. So, too, will the Women’s Fund.”