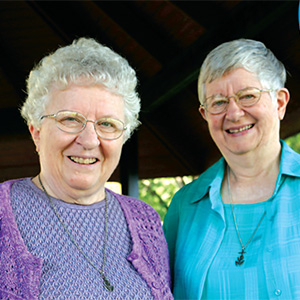 Sex trafficking—when people are forced or coerced into the commercial sex trade against their will—exists in Nebraska, and it happens more often than you might think.

According to a 2013 report from the Governor’s Task Force on Human Trafficking, sex traffickers frequently target vulnerable people with histories of abuse and then use violence, threats, lies, false promises, debt bondage or other forms of manipulation to keep victims involved in the sex industry.

Rosalee Burke, a nun with Notre Dame Sisters and chair of The Coalition on Human Trafficking, says that victims are often groomed for the position.Sister Burke shared the story of a former high school football player who was tasked by his uncle to go back and recruit high school girls for human trafficking. “When they broke that group, there were six to eight girls who he was acting as a pimp for. They had brainwashed high school kids,” she says.

In other cases, victims are kidnapped. Sister Burke recalled the story of a girl who had gone to visit her grandmother in a small Nebraska town. She was anx-ious to go to the park but her grandmother wasn’t ready. So she went to the park by herself. The grand-mother came along five minutes later and could not find her. A neighbor said he witnessed her grand-daughter getting into a truck with a guy. She was not rescued from trafficking until three years later.

The Coalition on Human Trafficking hopes to help prevent tragic stories like these with a pilot project that trains hotel and motel employees to recognize the signs of traffickers when they see them, and to respond by reporting to their manager.

The Coalition is comprised of volunteers from three area women’s religious groups: The Notre Dame Sisters, The Servants of Mary and The Sisters of Mercy. They receive assistance from the Attorney General’s Human Trafficking Coordinator Stephen Patrick O’Meara and Douglas County Sheriff Tim Dunning.

Sister Burke says that two years ago, when she first began researching human trafficking in Omaha, she didn’t think it was possible. She soon learned that sex trafficking in the Midwest is a problem that only continues to grow.

Celeste Wobeter, a nun with the Sisters of Notre Dame, is chair of the hotel/motel subcommittee. Sister Wobeter says that she has received a good response from the hotels and motels in the pilot program. “This allows us to work out the problems and improve it step-by-step as we go along,” she says.

Hotel employees watch a PowerPoint presentation that explains what sex trafficking is, how it is happening in Omaha, the signs employees can look for, what they can do about it and who to contact in each case.

“The managers are very impressed with the training, and we’re grateful that they see it as helpful and that they really want to promote it,” Sister Wobeter says, adding there is also a good volunteer pool helping out. “The volunteers are just so enthusiastic and so professional. I am very proud of the work they are doing.”

Malik recalled the story of a victim who was at a hotel for four days wearing very little clothing. When the police intervened, they asked her why she didn’t ask for help. She replied that during those four days, no one even looked at her. The coalition wants to interrupt this bystander effect, which happens all too of-ten. “Don’t just be a bystander. If you see something, say something.”

To volunteer to become a trainer or an ambassador for the hotel/motel subcommittee, contact The Coalition for Human Trafficking by emailing Sister Celeste Wobeter at cwobeter@notredamesisters.org.