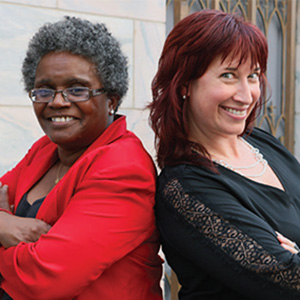 Young people in Omaha are definitely noticing the mince-no-words billboards, bus shelter ads, radio spots and social media geared toward raising awareness about sexually transmitted diseases, says Chelsea Oliver, a 20-year-old public health major at the University of Nebraska Omaha and youth community health worker at North Omaha Area Health (NOAH) free clinic. And she knows they’re noticing because she keeps hearing comments about the campaign from both her peers at school and her clients at the clinic.

“They are really eye-opening and people have talked about them,” she says of the various messages. “It’s more relatable for a younger audience and the campaign actually helps with guiding the right in-formation. This is a great movement to get people aware and talking about STDs. People are afraid to talk about it, but when you put it blunt like that, it makes people more open to the topic.”

Adolescent Health Project Coordinator Brenda Council says other evidence beyond the anecdotal is also showing that teens and young adults are engaging in the conversation about STDs and the factors that have contributed to Omaha having some of the highest STD rates in the nation: limited knowledge about STDs, fear and denial about the risks involved with sexual activity, and lack of condom use, to name a few.

“We get a report on the number of impressions, the number of Facebook likes and Facebook shares. The data we get on social media—which is where the youth are, more often than not—shows we’re reaching a lot of youth,” she says. “We are achieving our objective to raise awareness in the community and begin a community conversation about how we eliminate this health risk to our adolescents.”

The Adolescent Health Project, launched in January, responds to research backed by the Women’s Fund that continues to point to sexual literacy and teen pregnancy as two of the top issues facing girls in our community. The project’s primary objective is to create sustainable, community-wide changes through a research-based, results-focused, comprehensive approach that will in-crease the sexual knowledge and health of youth and thus decrease the number of youth engaging in risky sexual behavior—ultimately decreasing the rates of STDs and teen pregnancy.The Women’s Fund joined forces with the Sherwood Foundation, Douglas County Health Department, Nebraska Department of Education, Nebraska Methodist Health System, UNMC College of Public Health, the United Way of the Midlands, the Grove Foundation and Building Healthy Futures to establish the Adolescent Health Project.

The four priorities of the Adolescent Health Project are to advocate for medically-accurate, age-appropriate comprehensive sexuality education in all middle and high schools utilizing WISE (Working to Institutionalize Sex Ed) protocol; build capacity for STD testing and treatment among clinical providers through a request-for-proposal process; launch a cutting-edge media campaign that is informed by teens, aimed at teens and tested by teens to increase awareness, promote safe sex practices and promote STD testing; and increase access to long-acting reversible contraception (LARC).

The media campaign is underway and seven clinical providers—NOAH, Charles Drew Health Centers, Nebraska AIDS Project, One World Community Health Center, Planned Parenthood of the Heartland, Douglas County Health Department and Nebraska Urban Indian Health Coalition—are offering education and free STD testing and treatment for young people with support from the project. Omaha Public Schools is in the process of revising curriculum standards and getting educators trained for upcoming changes to ensure the sex education curriculum is both comprehensive and up-to-date.

Soon to be introduced to the program is a text hotline through the United Way that will capitalize on the communication medium preferred by adolescents and allow them to text their questions and inquiries related to STD prevention and testing. Another program element in development is education and training for youth-serving organizations.

“Our vision is of a community where every woman and girl has the opportunity to reach her full potential. And we know from research that factors that contribute to women and girls not reaching their full potential are STDs or unintended pregnancies,” she says. “The objectives of the Adolescent Health Project fit squarely within our mission and our vision.”

The media campaign targets both genders, and the services the Adolescent Health Project supports will benefit young men in the community, too, she adds. “The STD treatment and testing is intended for all adolescents ages 15 to 24, and we must ensure that young men as well as young women are addressed,” Council says. “One aspect of the project is to increase condom distribution to both females and males.”