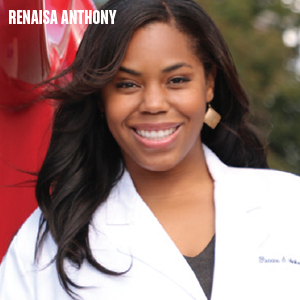 Renaisa Anthony, M.D., deputy director of the Center for Reducing Health Disparities and faculty member at UNMC, exemplifies the impact she declares to make with her life’s work. Born and raised in Detroit, Anthony left home at age 13 to attend Piney Woods Boarding School near Jackson, Miss. “That school changed my life trajectory forever,” Anthony says. “That’s where I learned that the world was my oyster—that anything I wanted to do was possible with the caveat that it be mission-driven to improve society.”

Piney Woods School was founded in 1909 by Laurence C. Jones to educate former slaves, according to Anthony. “The school has a long legacy of taking children who have significant potential, but are in significantly disadvantaged environments. They work to identify them and give them a safe haven conducive to learning,” she recounts.

Anthony flourished. She continued her education at the University of Minnesota with a full scholarship to earn a Bachelor of Science degree in Agriculture with an emphasis in Animal Science. “I thought I wanted to be a veterinarian,” she says with a laugh. Visits home during college breaks changed her focus. “I really saw that there were some things going on in that community that didn’t promote health, but, in fact, promoted disease and dysfunction,” she says. “My family and my community needed me to take care of people, not animals.”

She chose University of Chicago for medical school because of its location. “It’s smack dead in south Chicago so the majority of patients resemble people in the community I came from,” she says. Firsthand exposure to what she later learned to call health disparity caused her to question how she could take this very important information she was learning to the people who actually needed it, she recalls. Anthony was treating the same teens for gonorrhea one week, and then again weeks later for chlamydia (both are sexually transmitted diseases that can cause considerable complications if untreated). “Where were the prevention efforts?” she asked herself. “Why were women dying of cervical cancer when detection and treatment is accessible through government programs?” Experiences, mentors and professors nudged her in the direction of her emerging passion—public health. Anthony earned her Master of Public Health at Harvard.

“I learned in public health school that the greatest predictors of health are the modifiable factors of wealth, socioeconomic status and education,” she says. “Once I learned about that, I knew I wanted to be a physician—not just to address disease, but I wanted to incorporate addressing those social determinants of health.” Throughout her training, Anthony discovered she had a knack for connecting with women of all ages. She followed that passion to Vanderbilt University for clinical residency to study obstetrics and gynecology. “It was there that it came full circle for me to see the limitations of medicine as a physician to change and impact communities,” she says.

Spending 80 hours a week diagnosing and treating sick people in the rushed routine schedule of a doctor’s job was not her niche. “I believe I’ve been called to take all these experiences I’ve had in different environments, socioeconomic groups and cultures, out of the realm of medicine and go to work directly with communities and individuals to either delay the onset of disease or to prevent it completely,” she declares.

This mission lead Anthony to Washington, D.C. to continue her research studies as a fellow at the U.S. Office of the Surgeon General and also at the National Institutes of Child Health and Human Development (NICHD). She wanted to understand how legislation works from the healthcare perspective and to use those lessons to impact population-based change in the lives of women, she says.

Doors opened for her to transition to academia as an assistant research professor at George Washington University with Ayman El-Mohandes, then chairman of the Department of Prevention and Community Health, as her mentor. She spent about 20 percent of her time on Capitol Hill. “I convened doctors in support of the Affordable Care Act because most were there trying to protect their own financial interests,” Anthony states. She testified before Congress and stood near Nancy Pelosi, minority leader of the U.S. House of Representatives, on the gallery floor the night that bill was passed. In that moment, Anthony says, she knew much could be accomplished when like-minded individuals worked together to impact change.

In 2010, Anthony followed El-Mohandes to Nebraska to serve as a founding faculty member of UNMC’s College of Public Health and to work with the Center for Reducing Health Disparities. “I came and I fell in love with the center, the staff, the people who literally are out in the communities on the ground, working with people, working with families. What I saw was a passion and dedication to the community,” she says.

“Omaha is a microcosm of the entire nation,” Anthony states. “All the disadvantaged groups are here and there is opportunity to be a part of the solution working with the community.” She is serving as the medical champion for the Women’s Fund of Omaha’s Adolescent Health Project. “My vision and my hope for the project is that over the course of 10 years, we will see at least a 50 percent reduction in teen pregnancy rates and STDs, as well as reducing the gap in disparities,” Anthony says. “If we reduce overall rates by 50 percent, but the disparities persist, I’ll feel that we failed.”

Her goal is to not be able to look at a patient’s race and be able to make a prediction of what they might have. Examples of significant disparity are: Teen birth rates are five times higher for Hispanics/Latinos than for Caucasians and rates of chlamydia are nearly 10 times higher for African Americans than Caucasians in Douglas County. “If we do it right, we’ll not only reduce the rate of unwanted pregnancies and STDs, we’ll reduce the gap in the disparities that exist,” Anthony explains.