Lemur For a Day 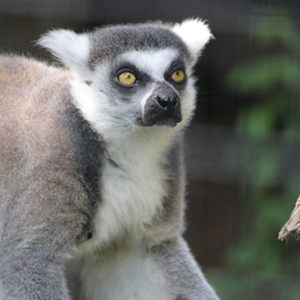 If I had to be an animal for a day, I think I’d be a ring-tailed lemur.

Specifically, I’d like to be a lemur on Election Day, because I rather like the idea of, “Hey, I’m a lemur!” as a campaign slogan.

I equally like the idea of running for office, but I lack political knowledge, a platform and funding. Plus, I’m without the politician’s red tie, have no parade banner and lack a clean kitchen (which I’d need for those parting shots in commercials where my smiling progeny and I wave, “Ta-ta, bye now,” while that announcer-guy prattles on about who ponied up for the 15-second spot).

See, if I were a lemur, when faced with tough questions such as, “Lemur, should the city expand transportation options?” I’d simply reply, “I have a tail!” or “Watch out for my scent glands!”

Also, as Lemur Candidate for a Day, I’d ask to be called “Jillmur,” because this is funny, and I’m pretty sure lemurs enjoy a good laugh. I mean seriously, have you ever seen a sad, sad lemur? Nope. Lemurs are wearing masks—masks of happiness. Just look at their pert, ringed eyes (the windows to the lemur soul).

Don’t get me wrong. I’m not making fun of lemurs or politicians. They’re great, and I’m pretty sure both are endangered and live on the island of Madagascar. Either that, or I just made that up. Hard tellin.’

At any rate, I am making fun of myself as Jillmur, the Lemur Politician (for a day). While campaigning, I’d wear a plaid vest and carry a blue crayon in my silky front paw. I’d be a dapper lemur.

Once the day was over, I’d revert to Regular Jill, would vote (using my blue crayon), then I’d create a parade banner for my kitchen—a kitchen I’m definitely going to clean.

Here’s why: According to Today Health, the average kitchen sink has “more than 500,000 bacteria per square inch in the drain alone.” I’m not pulling your lemur tail on this one. This is true—and awesome, IF you like bacteria.

Another truth: Studies show most kitchen sinks are dirtier than most toilets. Scary, right? That’s why I think politicians and building inspectors should band together in approving the launch of my new product, “Sinklet,” a kitchen sink that doubles as a…umm…

Scratch that, Sinklet is just a really teeny kitchen basin, like, for babies and people with strangely miniature hands.

What might surprise you about Sinklet is, I invented it just now. My mind said, “Hey, Jillmur, here’s a little idea that might be the next big thing.” My brain is nice.

Taking Sinklet from concept to reality might seem daunting; however, I’m pretty sure I’m up to the challenge. Plus, this might afford me an opportunity to appear on “Shark Tank”—that show where slightly abrasive bazillionaires offer to fund precariously marketed new products.

Not that abrasive personalities bother me: I have a tail! I mean, a tale, and I’m not afraid to use it.