A Vision Beyond Style 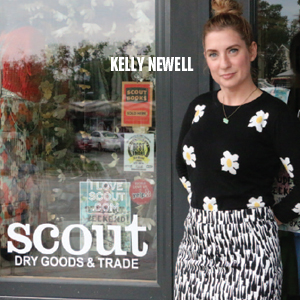 Omaha’s historic Dundee houses a collection of unique stores and eateries. And right off of Dundee’s Underwood Avenue sits a treasure many Omahans have been buzzing about: Scout Dry Goods & Trade. Since its inception in January 2008, Scout has become a fast favorite among locals.

Scout—open seven days a week to buy, sell and trade modern and vintage clothing and accessories—creates a distinct shopping and selling experience for its customers. But don’t get this one-of-a-kind store confused with consignment boutiques.

“Scout is technically a resale shop. Often times those are grouped together [consignment and resale shops] and when people ask the question, I normally say it’s very similar. The only difference is, we’re going to buy the items outright from the customer, rather than put them on consignment,” says Kelly Newell, owner and founder of Scout Dry Goods & Trade.

After moving to Omaha 11 years ago, Newell, born and raised in Virginia, now considers herself an Omaha native. Before Scout, she worked as the corporate membership director at the YMCA of Greater Omaha for three years. While working there, Newell needed business casual attire and dressy outfits, but didn’t have the income.

“I started Scout because I wanted to shop at a place like Scout, and there wasn’t really anything like that,” Newell says.

From the start, Newell was confident Scout would become a success. “When I got the idea in my mind, it was kind of one of those things…If I don’t do it, somebody else will and I want to be the person that does it because I can do it the best,” Newell says. “I had no doubt that it was going to be a success, that it would work. I was 100 percent sure.”

But not everyone had the same confidence. “A lot of people thought I was really crazy; I held myself back a lot too,” she says.

Newell, who has a bachelor’s degree in graphic design, credits her reluctance to jump right in to worries about not having a business degree. And yet in the end, it all worked out in her favor. Newell now leverages her education by using “some of those skills from my marketing and design background to incorporate into this position.”

In 2008, Scout Dry Goods & Trade became incorporated and, in the same year, opened its doors to the public. “I had everything on the line. I had a second mortgage on my house, a business loan, credit cards maxed. I was completely in and, you know, there is something to that. Failure was not an option,” Newell says, despite the fact that she opened Scout’s doors during the recession.

“We saw a lot of really good items come in because people just wanted to get rid of them, so they could have some money,” Newell says. “On the flipside of that, people wanted to save money, so we were able to provide discounted items at 75 percent off of retail.”

While the economic downturn led to the extinction of many small businesses, Scout fared just fine, and many loyal customers have returned to shop throughout the years. “I’ve always seen Scout as more than just a product. We do community events, we work with a lot of local artists,” Newell says. “The last thing I want Scout to be is just another product and just another store.”

As the resale shop continues to evolve, it’s clear Scout is more than just a store, with its refreshing, creative and artistic vibes, as well as its environmentally friendly initiative. “At every purchase, the customer is asked if they need a bag or want a receipt,” Newell says. “Even that little thing helps people to pause for a moment and say, ‘I’m actually just parked outside; I don’t need it.’”

Along with eco-conscious efforts, Newell also makes sure Scout gives back. And the shop’s wildly popular Dollar Sale, which occurs every Sunday, helps continue that effort. “Any items that are leftover [from the Dollar Sale] are donated to Habitat for Humanity Omaha and those items, the clothing items, are given to the families that are working with Habitat for Humanity,” Newell says.

For those with an entrepreneurial spirit and the goal of starting a business of their own, Newell advises having a clear vision, understanding your audience and being willing to accept the consequences of the worst-case scenario.

“I’ve been lucky enough to have a lot of good mentors throughout the years who have been willing to talk with me and work with me through issues that have came up, so that’s been a huge blessing,” says Newell, who is also the mother of three children.