Leading in the Corporate World 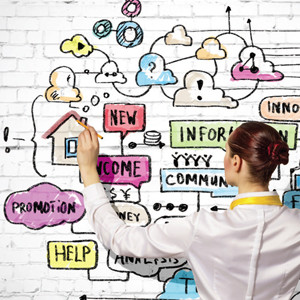 How (A Few) Women Are Getting Ahead

Only a few generations ago, women were rarely represented in upper management in corporate America. Today, we see women in the leadership teams of most corporations, but we’re still nowhere near 50 percent. The factors that keep the numbers disproportionate are varied and complicated, say local female business leaders.

“We may have never had a female boss or a working mom or a professional in an organization we’ve seen as that mentor or role model, so we may not have envisioned ourselves in a leadership role,” says Sarah Johnson, manager of workforce and talent for the Greater Omaha Chamber.

Motherhood can play a role, too. “Women are the primary caregivers, even though we’re making wonderful strides with men contributing more to the household,” says Adrienne Fay, director of marketing with Borsheims Fine Jewelry and Gifts. “But if the child gets sick or if it’s a snow day or there’s a carpool pickup, not being able to have flexibility over one’s hours is a hindrance.”

Career choice is also something to consider. “I think there are multiple factors that create the perfect storm to keep women from rising up into leadership positions,” says Lindsay Lundholm, a partner with law firm Baird Holm. Girls are not always encouraged in their younger years to explore STEM (science/technology/engineering/mathematics) fields or lucrative career paths the same way boys are. “A lot of women, I think, self-select positions that are very valuable to society but not well paid and certainly not the track for leadership in business.”

Shannon Hite, vice president of the customer contact center with Mutual of Omaha, agrees that past generations of women may have felt their career options were limited. “Originally, roles were more gender specific. Women who self-selected out of leadership opportunities either didn’t believe they had the support they needed or that organizations enabled only men to pursue these roles,” she says. “I believe that, fundamentally, men and women are wired differently; we socialize girls and boys differently and over time that may exacerbate our natural tendencies.”

Yet women today are more likely to feel they can forge career paths from unexpected places. Angela Cooper, now a manager of benefit solutions operations at Mutual of Omaha, says that 12 years ago, she was determined to make the most of an entry-level opportunity.

“I started at Mutual almost straight out of college, and I started as a secretary,” she explains. “I hesitated to take the job at first, but I realized that by working so closely with a strong leader I could learn a lot about leadership. It got me where I am today.”

Employers themselves can also foster a culture that allows women to professionally flourish, say women who have achieved leadership roles in organizations.

“Borsheims is a very progressive employer when it comes to gender,” Fay says. “We’re 85 percent female and the majority of our executive team and leadership teams are women. We have a female president and CEO, CFO, director of merchandise, controller, as well as myself as director of marketing.”

Paige Winkler, capacity development manager with Werner Enterprises, says her organization supports women in leadership as well. “Werner Enterprises has always done a great job supporting women, and we have support from the highest level,” she says. “As a recent example, our president and COO Derek Leathers was recently awarded the Tim Rouse Advocate for Women in Leadership Award. Werner recognizes the talent that women bring to the organization and continues to emphasize and focus on exposure, work-life balance, education and mentoring for all associates.”

Baird Holm’s Lundholm says she chose to work for the law firm in part because of its support of women. “Something that attracted me to this law firm was the number of female role models who had wonderful legal careers and families, and it didn’t seem like it was an issue for them,” she says. Baird Holm, now celebrating 140 years, has evolved over time from an organization with no female lawyers to one with numerous women in the ranks. “We’ve had female partners and powerful female lawyers for a really long time. I think we’ve been at the cutting edge in a lot of ways.”

Not only have businesses come to recognize that women can be leaders, they also know good leadership crosses gender boundaries. “Women leaders are passionate, ambitious and persistent. They see the goal and want results,” Winkler says. “Women can also collaborate and are willing to lean on each other for guidance and support.”

“On the whole, I tend to find women to be (better) listeners in leadership roles, and have more of that servant-leader mentality. From what I’ve perceived, it’s less ego-driven leadership; it’s more of, ‘I am a leader here to remove obstacles for my team and help them do their jobs better’,” Fay says.

Johnson says both men and women can emulate many different types of leaders. “I think it’s really a personal style. I think you can gain a lot from having diversity in the workplace.”

Cooper agrees. “It’s about who’s best for the job, not if they’re a man or woman, young or old, black or white, Trekkie or Star Wars fan.”

“I think a really great leader will have a good balance of the strengths we think of as ‘masculine’ and ‘feminine’ — good communication skills, empathy, being able to listen, building consensus amongst folks,” Lundholm says.

“Women weren’t applying for leadership positions 30 years ago like they are today,” Winkler says. “Corporations are recognizing the abilities women possess to do the same jobs as their male counterparts. At the end of the day, women want the same visibility and opportunity for those positions; the talent level needs to be viewed as equal and the most qualified person should always get the job.”

“Corporations have made some specific attempts to help women visualize that they could be a leader or an executive. They have also had women in those roles — not who are in these roles just because they are women, but who had the credentials to be selected,” Johnson says.

The increasing prevalence of women in the workplace in general, along with greater representation in management, has changed the American workplace in ways that have benefited men, too. One key improvement is the implementation of more family-friendly policies, such as flexibility in scheduling. “No one has an easy time leaving their children every morning,” Hite points out.

“When you allow someone that personal flexibility with their schedule, they become a huge advocate,” Fay says. “It breeds enormous respect and loyalty, and they’re going to reward you with very hard work.”

Another thing employers can do is foster networking and mentoring relationships, either through formal, sanctioned programs or by supporting informal efforts.

Johnson, who chairs Women’s Fund Circles, a group of approximately 50 young professional women, says the value of networking is both personal and tangible. “I think more education and awareness is needed, like (through) the Women’s Fund, to engage both men and women and make them aware of how more diverse workplaces make businesses more successful. There is an economic case behind it, and that extends beyond gender.”

Cooper, who is also a member of Circles, agrees. “Something we can learn from men about communication, interestingly, is that building relationships is part of work. A golf outing isn’t just a social event … it’s important and purposeful ‘work’. It’s where you build the network you need to get things done. These un-spoken truths are important to pass on. I think we’re all trying to start the conversation about how can we share the lessons we’ve learned with other women.”

So, what still needs to be done?

“We need to start acknowledging the gender gap in leadership roles; it’s not just isolated to corporate America, but the nonprofit sector and small businesses, too, where in the top level of leadership there is a disparate difference in the number of men and women,” Hite says. She cites her own employer as a great example of a company that has taken active steps in facilitating employee resource groups — including diversity and inclusion affinity groups — as well as formal and informal mentoring relationships.

“Women need to work together and support each other. Find a mentor or a sponsor who can help guide you through your career,” Winkler advises. “The time has come for women to collaborate and hold hands. Support each other and eliminate the drama. When women do this, we are successful.”