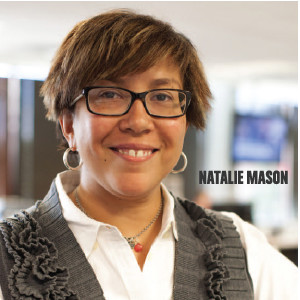 Natalie Mason does not fit the typical profile of an energy company executive. To begin with, she’s female. She’s also a woman of color. She’s under 40, and she’s not from a well-connected family, or, as she puts it, “I come from a very poor family in Lincoln who knew nobody, so where I’ve gotten is all due to hard work.” She is married to a woman named Jen and is actively involved in raising the couple’s 15-month-old triplets. “I’m still working full-time and trying to continue to rise in the ranks.”

Mason is clearly one of a kind, and she’s never let anything stop her career aspirations. The director of business development for Tenaska BioFuels LLC for more than four years now, Mason entered the energy field from banking — the field she initially chose after graduating with a bachelor’s degree in business administration-finance from the University of Nebraska-Lincoln.

“I feel like I’m on the extreme spectrum of where women are not in leadership, because I work for an energy company and there aren’t a lot of women in energy,” Mason says. “I don’t know if it’s because we as women don’t go into the field or if we feel we can’t, but the pool of women to choose from (as leaders) is very small.”

Her employer has women represented in human resources and sales, but most other areas are predominately male, Mason says. She’s pleased to say that Tenaska has started a mentoring program to foster more diversity in leadership and to help support leadership among women.

“I’m the type of person who likes to have a mentor, or women I can look up to and seek direction from, so I definitely have reached out and worked with the female leaders here,” she says. “I’ve done that on my own and they’re very open to it, and they’re mentoring others as well.”

Mason emphasizes the importance of networking. “It’s also going out and joining groups like the Women’s Fund, being on the board of Friends of Planned Parenthood, just being around other women leaders and women entrepreneurs,” she says.

Although she likes to learn from other successful women, Mason says she feels good leadership is not gender-dependent. “I think that a leader, regardless of whether you are female or male, became a leader because of their intelligence, their ability to lead a team, their communication, and their integrity,” she says. “I think that we as women do tend to sell ourselves short and think that if we are aggressive, people will think we’re a bitch. But in my experience, if you’ve got something to say, guys just want you to say it and move on. I think it’s more our perception than anything else.”

On the other hand, it’s OK to exhibit traits associated with women — such as considering the comfort of others — as long as it’s the woman’s choice. Mason says she doesn’t feel she’s put in an inferior position just because she offers refreshments.

“Yes, I have a title of ‘director of business development,’ but that doesn’t mean I’m not ordering lunch for a meeting, or even if I am getting coffee, I truly believe that it’s not demeaning me to do it; I’m just the only one who thinks of it,” she says.

Mason says that her experience at Tenaska has been very positive, but she believes that other companies may still need to do more.

“To get more female leaders, companies need to catch them early,” she says. Making young women as early as high school aware of career options, sending recruiting representatives to college campuses, fostering women’s mentoring relationships (especially for new-hires and entry-level employees) and promoting networking groups are all activities businesses can initiate to develop more female leadership. And women need to help other women, too, she adds.