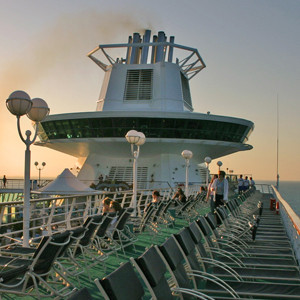 Those Big Boat Executives Should Just Pay You Now

A Florida cruise line just announced it will refund passengers 110 percent if they don’t have fun. If you’ve never been on a cruise, then let me tell you, those big boat executives should just pay you now.

Here’s why: As you might imagine, cruises mean you and 2,500 strangers are traversing the ocean on a multi-decked ship, complete with super-entertaining options such as walking around the ship, going up and down stairs on the ship, standing near the rail of the ship and taking pictures with your iPod … on the ship.

Once a day, the all-powerful Cruise Grand Poo-Bahs stop the boat and allow you off the world’s largest fishing lure. This is when you think, “Run for it,” because you know you’ll soon be herded back on the boat for more floating and “cruising.”

Here is the kicker: UPI reported Sept. 13, 2013, that the same cruise company offering the refund noted the money and free return-trip transportation are available only if vacationers aren’t having fun within the first 24 hours of their trip. After that, you’re on your own.

Unhappy when the ship’s generators fail on day three and you’re stranded at sea? Good luck; the refund does not apply. Seasick? Enjoy your trip! Feel claustrophobic and trapped? No problem, just feast your peepers on the endless expanse of ocean, ocean and more ocean.

Oh sure, cunning cruise aficionados will deceive you by touting the ship’s buffet food and nightly ice sculptures. Look, I have an ice sculpture at home, in my freezer, sort of under the ice maker. My perfect sculpture is shaped like a mini, frozen Jabba the Hutt. I like to think he watches over my food when the door closes and the magical freezer light is extinguished.

My biggest question about the cruise line’s 110-percent refund policy is this: Who determines whether you’re having fun? If you make a really, really sad face are you asked to, “Hey, lighten up, sport,” or are you thrown into some type of un-fun holding pen for party poopers?

Here’s another one: Let’s say you enjoy periodically bursting into song — you know, belting out a show tune or two, but the other vacationers on the vessel think you’re ruining their good time. What if you can’t have fun without your personal, impromptu concerts (which aren’t bad, given your lack of vocal training and penchant for replacing the words with “blah-de-blah-blah”), and you’re made to stop the music? Now you’re not amused at all, but neither are they. Who gets the refund?

It’s not that I have anything against cruise lines, cruise ships and cruising. I’ve been on a cruise. Once. Fun things happened. My best friend got married. I found some quarters. I got to visit the ship’s doctor when I was incredibly sick with a sinus infection. Plus, the ship did not sink. All good things, right?

We were even allowed off the boat, with the other strangers on our ship, to walk along a sandy beach. I scratched “Help me” in the sand with a stick and tried to light an egg roll from the buffet on fire as a flare.

Then I realized it was getting dark, so I bellowed the main number from “Thoroughly Modern Millie,” as the crowd parted (and sort of appeared to be protecting their children), while I marched unchallenged back to the boat. That’s when the captain asked me to leave. I told him I wanted a refund.