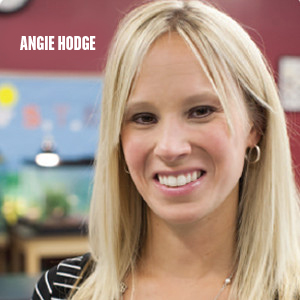 Imagine this: A high school student living in a small town with a 4.0 GPA and straight As in every math class she’s ever taken. She knows she likes math and that it comes to her easily, but teaching is her passion. As graduation approaches, she wavers between teaching math in middle school or high school. Her male math teacher looks at her and declares, “You are a female of small stature. You shouldn’t teach middle school or high school. You should go into elementary education.”

Now less sure of her path, she enrolls in college as an elementary education major, but along the way, others encourage her to revisit her dream. Today Angie Hodge is associate professor and Haddix Community Chair of Mathematics at UNO. “If someone else hadn’t seen my talents, then I wouldn’t be doing what I’m doing now,” she says. Her very first female college math teacher saw her gift immediately in a Math for Elementary Education class her first semester of college. “She pulled me aside and told me I should consider taking calculus. That went well, and other teachers during my undergraduate years just kept encouraging me. Before I knew it, I was going for my Ph.D!” she says.

Now Hodge not only teaches mathematics at the college level, but encourages other teachers to inspire students to discover and explore their own strengths in the discipline. “Along with my responsibilities in teaching and research, my mission as community chair is to inspire people to become interested in secondary mathematics education,” she says. She encourages others to consider the very profession her high school math teacher discouraged her from pursuing. “I almost didn’t go into mathematics because of negative support, but then the reason I was successful was the positive support,” Hodge says. “That’s why I’m so passionate about helping other females, and other students in general, who have potential in mathematics to not be scared off by the idea that it isn’t a female thing or is a male thing.”

At UNO, Hodge is the advisor for the Math Club and teaches the beginning introductory Science, Technology, Engineering and Math (STEM) series of Calculus I & II. “I teach calculus in a way that’s more hands-on, cooperative learning,” she says. She aims to increase the interest of newer students, and women in particular, in STEM fields by showing that math is more than just solving routine problems. She also leads math circle workshops for middle school teachers to give them new ideas to carry into their classrooms that make math more exciting.

Before joining the staff at UNO, Hodge was an associate professor at North Dakota State for four years, where she participated in research on gender equity within the mathematics discipline. They surveyed women who had successfully taken differential equations classes, asking them what it was that got them into mathematics. The typical answer: Experience. Having actually built things and competed in math- and technology-related activities outside of the classroom gave these women the confidence they needed to continue, Hodge says. She’s all for girl-specific programming in STEM activities to give girls that exposure. “There are so many more males in STEM; it’s just not the first thing that girls think about,” she says. “But when you attach the ‘for girls’ label to it, parents and teachers see it and say, ‘oh this is for girls,’ where typically when they see a robotics class they might automatically think it’s for boys.” Girls also feel safer and more comfortable knowing that they won’t be the only one in a group of 10 or more boys, which is typical in many co-ed STEM camps, Hodge adds.

“In my research I have found that girls tend to be under-confident — and boys are often over-confident — in their math abilities,” Hodge says. Because a girl might not recognize an aptitude for STEM in herself, teachers and parents need to keep their eyes open for talent in these areas by watching test scores and critical thinking skills.

“Another thing to think about is how we give compliments to females,” Hodge warns. “Often times we focus on their hair or the clothes they’re wearing, which is fine, but I think we also need to look for those qualities in girls that are outside the box and aren’t necessarily the standard stereotypes; things they are good at that go under the radar.” She urges adults to help girls recognize those qualities and give them opportunities where they can be successful.

Hodge’s own story proves that a little encouragement goes a very long way.