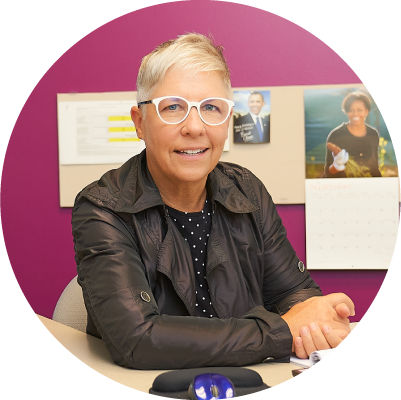 As an undergraduate student at California State University in Long Beach, Erin Porterfield considered studying social work but decided she didn’t like it and chose psychology instead. She later reconsidered, earning a Master’s degree from the University of Nebraska at Omaha’s School of Social Work and CSMW (Certified Master Social Worker) certification. Looking back, Porterfield says, giving social work a second chance was the right choice, because she’s been successful in the field ever since.

“I had a misunderstanding about what social work was really about,” she says. “It’s really about figuring out where someone is and what they are needing, letting them drive and just getting the resources to work together in a positive way. So, the inspiration was really believing in people and wanting to help them eliminate barriers to their own success.”

“That was valuable in so many ways. The honor of learning people’s stories and working with them to solve problems and create safety in their homes was amazing,” she said.

It was also the first time she saw firsthand that systems and organizations—from social and medical to housing and transportation—didn’t always work well together or integrate services smoothly.

“That piqued my interest in figuring out how systems that are meant to be part of a safety net—or safety creating or economically valuable and helpful—actually worked together when someone needs them to,” she recalls. “It can make it confusing for someone who is in a desperate situation and needs help sorting through all these different resources. I want to make those resources easily accessible and helpful to people.”

Porterfield took that desire and ability to facilitate and foster collaborations to her next nonprofit leadership positions, at Nebraska AIDS Project and Metro Area Continuum of Care for the Homeless (MACCH).

“I seem to have a bit of a knack for getting in on the ground floor for young nonprofits focusing on collective impact,” she says. “I had been with MACCH for over six years and was ready for a different experience with collective impact.”

In 2013, she began as Executive Director for Heartland Workforce Solutions, Inc. (HWS), a partner of the American Job Center Network.

“It’s really a similar concept, bringing varying resource partners together—funders, businesses, systems—to attempt to solve a problem, such as homelessness. This is similar in scope, but casting a vision at full employment,” she says. “HWS is collective impact for workforce development, bringing all these different resources together—businesses and career-seekers—to fill the talent gap locally. Those solutions are often creative solutions that only come about when you bring all together to create career pipelines connecting that talent to great positions that really meet our labor market need.”

The COVID-19 pandemic posed significant challenges to the workforce, Porterfield says, and also to HWS.

“We found that we were one of a handful of American job centers that remained open. That was not something I went into hoping for, thinking about, declaring; it was something that occurred. And trying to carry safety for those who were working here and safety of the public and navigating the daily changes . . . there were times when we had 200 people out in the parking lot waiting to get in to get help with their unemployment insurance. To say that the unemployment system was utterly overwhelmed is a complete understatement,” she says. “So, we were working with our partners to figure out how do we meet the demand. We kind of became synonymous with the unemployment office, which is not at all what our identity is. It caused us to understand quickly and navigate agilely to figure out how to meet the need.”

Many HWS clients were new to the process of filing for unemployment compensation, and Porterfield and her team provided support to some who were unfamiliar with computers or were confused by the lengthy process and frustrated by long waits in phone queues. They saw people whose barriers such as language, disability or technology were exacerbated due to the circumstances and did whatever they could to help.

“We learned there is a lot more we can do online; while we carry that and want to maximize access virtually, we also carry and know that there are many people who don’t have access to a computer, or an email or stable internet,” she says.

HWS staff saw women affected somewhat disproportionately by the pandemic, with many having to delay returning to work to accommodate their children’s virtual learning at home, Porterfield says.

“Women just, often by default, have the responsibility of the kids or for family members who may need care,” she says.

Even before the pandemic, HWS helped women seeking new or better employment reach viable opportunities, and that goes beyond making job candidates and employers aware of one another, Porterfield says. It can mean simple services like training, providing an assessment to verify specific skills, hosting career fairs, assisting with resumés and mock interviews, and supporting clients in their efforts to acclimate to a new position and work environment.

“That’s where we come in, to build those relationships to create those easy pathways that connect people to great jobs,” she says.

“We’ve found, too, through some of our assessments and linkages with employers, that people have been under-shooting the kinds of positions they have been applying for. And that, in fact, when they can verify the kinds of skills they have, they can apply for (more) jobs at a much higher salary. It’s changed people’s lives.”

HWS also works to open doors for women in nontraditional career fields, especially in companies with more openings than candidates.

“One of our roles is to help employers think, ‘What are the untapped talent pools we can open up?’ There are some industries that are used to hiring men and now we’re aware that those companies are not going to be able to sustain themselves if they maintain this kind of narrow hiring pool,” she says, adding that biases may be unintentional, but companies are seeing that women can do what used to be thought of as men’s work.

“What we’re seeing now is an opening up period; they’re learning that they have been limiting themselves.”

Porterfield is a native of Lodi, California.

She landed in Omaha after a 1985 visit to her mother, whose husband was stationed here with the military, and she’s been rooted in the community ever since. She has two sons—one at Westside High School and the other at the University of South Dakota. She says her work has come home in a sense, as her sons are reaching the age where they are developing their career paths.

Porterfield’s partner is Sangeetha Kumar, Creighton University’s Assistant Director for Student Care and Outreach. As a lesbian mom in leadership roles, Porterfield says she wants to be vocal about the “importance of bringing the whole self to professional life.”

“Perhaps I can serve as a role model for Lesbian, Gay, Bisexual, Transgender, Queer or Questioning, Intersex, and Asexual or Allies (LGBTQIA+) youth who are considering their own career potential,” she says, adding the possibilities are infinite.

“The best days in my work life are moments when people from different systems bring intention, synergy and resources together, making it easier and quicker for people to achieve their potential,” she says.