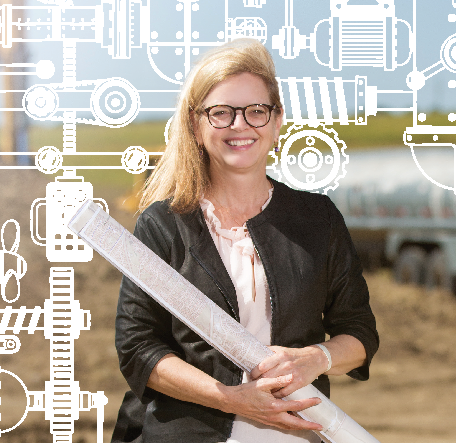 FEW WOMEN IN THE FIELD, BUT PLENTY OF OPPORTUNITY

Fourteen percent. That’s how many women engineers are working in all engineering specialties nationally, according to the American Society of Mechanical Engineers. The University of Nebraska College of Engineering shows that the numbers are a little higher here: from 1995 to 2017, the percentage of women engineers has grown from 11 percent to 17 percent.

“That’s not a significant increase,” says Nancy Pridal, president at Lamp Rynearson & Associates and a civil engineer. As an industry professional, she has some educated theories about why the numbers aren’t higher, but she prefers to emphasize that engineering is a career field that can be full of opportunities for women.

“There’s a different capacity needed to build the future than we’ve had in the past,” she says. “I think women are well-geared to step into that, with the strong technical background and then the ability to build consensus and have those relationships.”

Opportunity was one of the factors that drew her to the field in the first place, but Pridal’s own career path wasn’t exactly straightforward. After starting a family at a relatively young age, she entered college as a nontraditional student to study accounting. “I was always good at math,” she says. “But I quickly realized accounting wasn’t my thing. And I was sitting in these higher-level math classes and hearing all these people talk about engineering.”

Pridal was also working in real estate at the time, so she was familiar with the development side of things. Work contacts eventually connected her to Lamp Rynearson, where she began to envision a future in engineering. “I was sitting across from this woman and listening to how she created what she wanted from an engineering degree,” Pridal says. “And I thought that this was something I could do.” Pridal graduated from the University of Nebraska at Omaha (UNO) with a civil engineering degree in 1994, pursuing her education while working and raising her young family post-divorce. She laughs at the recollection of a saying she and her children coined: “Poor until ’94,” but she never wavered from continuing on in school.

Her employer allowed her to work from home and in the evening to ensure she could continue her studies. “Without that, I wouldn’t have made it,” she says. “I had a supervisor who made it work for me and saw my potential.” In 2005, she earned a master’s degree in organizational leadership, and her career has continued to flourish. She was named president at Lamp Rynearson this past August.

“I was able to create a position that supported the organizational mission and also supported my desire for growth and opportunities,” she says. Pridal says she didn’t pursue her career with the idea of being a trailblazer. “I’ve done what I needed to do for myself and my family and personal aspirations,” she says. But others have told her she’s an inspiration. “I’ve gotten some amazing, wonderful feedback from people saying ‘thank you,’” she says. “So how do I turn around and give a hand up and continue that? It was given so readily to me that I want to make sure I’m doing that myself.”

Unlike Pridal, Yuliana Linares knew she wanted to be an engineer well before starting college. In fact, she was still in high school when her interest was piqued. “I was good at math and science. Through a connection at the University of Nebraska Lincoln I was able to go to an engineering camp, where they showed us different types of engineering—electrical, computer architectural, mechanical—all different types. That’s where my interest really grew.” Linares says she’s a big believer in programs that provide career exploration opportunities, from youth camps like she attended to job shadowing and interning. “It’s never too early to start, I think,” she says. “Especially if you develop engineering as a specific interest, you can always tune it down to what ultimately you’ll be doing. There are so many different types of engineers out there that there’s always a fit.”

Linares graduated from UNO with a construction engineering degree, but her career actually began before she finished college. “I’m one of the few in the Omaha office (of Weitz Company) that started as intern and is still here,” she says. Twelve years later, she’s a project manager. Even now, she’s aware of her heightened visibility as a woman in her field.

“There are people who remember me from when I interned 12 years ago. They’ll remember my name and a project I worked on then, but I won’t necessarily remember them,” she said. Linares says she’s proud of her career, but sees her accomplishments more as individual than symbolic.

“It was something I was drawn to and something I’m passionate about, but I never considered myself to be spearheading the fight for females in construction,” she says. “I definitely encourage any young individual who’s interested in pursuing a degree in the engineering field.”

Linares adds that her employer cultivates an atmosphere that encourages young engineers, male or female. “I’ve definitely had the opportunity to grow and advance. I did have mentors here within the company. Maybe they didn’t see that they were mentors, but they played a very important role in me deciding what career path I was going to take within the company.”

Now Linares serves in a mentoring role herself. “I currently serve with the Architecture Construction Engineering Mentoring program,” she says. “I’m all for sharing the knowledge that I’ve gained and all for growing the next generation. Linares is now a married mother of young children, and acknowledges that work/life balance can be “challenging.”

“Having that moral support, regardless whether you’re male or female, with your significant other is important. Having that support is definitely critical in this industry because it’s very demanding. The hours are not always from 8 to 5,” she says. “But I think that if you really want something to work you’ll make it work regardless of your career path.” Edwina Justus became an engineer in the mid-1970s, but a different kind of engineer than Pridal and Linares. Justus was Union Pacific’s first black woman train engineer. She joined Union Pacific in an administrative position and was initially reluctant to pursue the engineer position because it meant relocating from her hometown of Omaha to North Platte with her then-husband and children.

But engineer was a solid job that provided a good income, and Union Pacific soonhired her husband, too. “I would have been the first female engineer, except I had to move,” she says. “I don’t think I realized at the time that I was the first black female engineer.”

Justus recalls meeting with both sexism and racism during her engineer days, but she was confident in her abilities and persevered. Her outgoing personality helped win over most of the doubters. “There were some guys that never gave me any credit, but there were other guys that always gave me my due,” she says.

She focused on doing her job well and making connections in her new community. Justus eventually ran for North Platte mayor, finishing third in the race. After moving on from Union Pacific, she continued to take being the “first” in stride. “I’ve had my hands in a lot of different things,” she recalls of her working years.

“I never took any crap, for one thing. And I was the first black woman at a lot of different places.” Justus also says that, despite taking on a pioneering role in a male-dominated career field, she always felt comfortable being her feminine self. Her colleagues called her “the fashion plate” because she was always conscientious about her hair, makeup and fashion choices, including wearing skirts and heels in the cab.“I always had my eyelashes,” she says.

This was definitely not the norm. “If you ask somebody what do you think an engineer looks like, it’s always a white man with the coveralls and that kerchief and a hat on his head,” she says. Now 74, Justus says she is full of stories and her dream is to find a way to share some of those stories. One favorite idea is to write a children’s book featuring a black female railroad engineer. Because even 40 years later, “you never see that,” she says. W