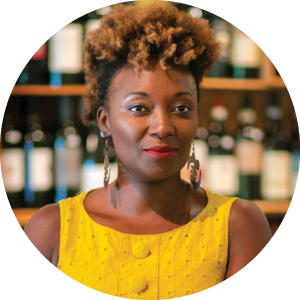 Emily Mwaja is the definition of girl power—literally. When she’s not fighting for the betterment of girls as director of programs at Girls Incorporated of Omaha, she’s competing in powerlifting competitions. Her secret? Staying strong in body and in mind.

Growing up, Mwaja dreamed of being a teacher, like her mother. “I’m really passionate about education because that’s a way you can make a difference,” she says.

After earning her bachelor’s degree in education, she planned to find young lives to change. But before she could find a teaching position, the young lives she’d change found her.

“I had a friend who knew about Girls Inc. of Omaha and said I should get involved,” Mwaja says. “So I was connected at a young age and it aligned with my passion.”

Mwaja started as an intern and worked directly with the hundreds of girls the nonprofit serves each day. The experience, she says, was akin to teaching in a classroom.

Mwaja’s internship turned into a 15-year career. In her next role, she worked as a specialist and maintained curriculum while also working with the nonprofit’s national office.

“I researched what other Girls Inc. nonprofits were doing across the country,” Mwaja says. “That was when I could really see myself making a bigger impact.”

Today, Mwaja oversees the staff and curriculum, and manages fundraising, development and expansion.

“I help create an environment that fosters girls who are educated and independent,” Mwaja says. “Girls who come to our program and people we work with in the community are the ones who are going to fill those equity spaces. We are creating the future.”

By gaining experience at all levels, Mwaja learned that at Girls Inc., she can find the inspiration to make a difference each day.

“My job shows me I’m making an impact in my community every day, one girl at a time,” Mwaja says. “Our girls emotionally sustain me. Not every job does that.”

The best part of her job is seeing Girls Inc. of Omaha’s mission realized and watching girls succeed.

“I love to see our girls get inspired. Maybe it’s a trip they took or a new program they tried. Maybe they failed and tried again,” Mwaja says. “But the most important thing is that they are excited about learning.”

She says she often reminds herself that helping individuals on their paths is a long journey.

“Working with people is hard. You have to be patient,” Mwaja says. “You don’t get these girls at home—only while they’re in the program.”

Often, she says, many of the girls who drop out of college are the ones who go back two years later, graduate and become active members of the community.

For young people, having mentors and role models who look like you is important, Mwaja says. “I have looked up to women who look like me my whole life and I’m lucky to have African and Black women in Omaha to look up to.”

Growing up in a Kenyan family, she remembers looking up to a Kenyan laywer.

“In fourth grade, I remember thinking that maybe I’ll be a lawyer because this woman stands up and fights for women’s rights,” Mwaja says.

But her mother has been her biggest supporter and mentor.

“My mother would say to me, ‘I’m glad you like that woman. Why do you like her?’” Mwaja says. “She always supported my passion for the betterment of women and girls.”

Another source of mental and physical strength for Mwaja is powerlifting. She has been powerlifting for more than 10 years and has competed in Nebraska, Iowa and Las Vegas. In order to become stronger, she must be engaged both physically and mentally. She compares this mental check to working with young people.

“I’ve always loved sports—from running track to powerlifting,” Mwaja says. “I was attracted to powerlifting because it has a strong mental component. You’re competing against yourself.”

Although she didn’t become a teacher, Mwaja has taught hundreds of girls at Girls Inc. of Omaha in hundreds of ways. After 15 years, her passion has never been stronger.

“I’m passionate about gender equity across the board,” Mwaja says. “Women and girls need a seat at every table in our society.” W

I am a Girl’s Inc. girl and now woman! I remember when Ms. Emily was new to Girl’s Inc. and saw the passion in your presence for us girls there at Girl’s Inc. Her impact is silent but POWERFUL! I appreciate her and every staff member at Girl’s Inc. to have so much drive, love, and support in the most long-term way I have ever seen from a non-profit today. That’s why I believe that Girl’s Inc. truly connects with generations of girls to help them build a future for themselves and extend that invitation to the community. I am forever a Girl’s Inc. girl!

Every bit of this article evokes images of young Mwaja’s mother, who had a great influence on my daughter as her standard 2&3 teacher in Kenya. Truly you are your “mother’s child” and a true inspiration. Keep up the good job