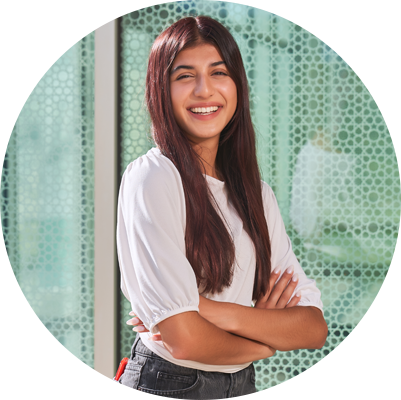 The intersection of “passion” and “purpose” has a name: Emaan Khan.

A senior at Brownell Talbot, Khan is passionate about people, and she is rallying in support of humans who menstruate, spearheading fundraising and engagement activities citywide to increase access to period education and products.

“People might think period products are accessible but there can be many barriers,” Khan says. “For some, it’s expensive. Others find purchasing period products, or talking about periods, awkward.”

Khan, co-president of Girl Up Nebraska, a United Nations Foundation initiative, is using her leadership platform to erase what she says some call a “stigma” around menstruation. She’s also hoping to raise awareness around the need for period products at local shelters and food banks.

“We sponsored a Girl Up Nebraska 5K run in March to shine a light on the issue of period poverty,” Khan says, adding the response was overwhelming and inspiring.

“It was amazing seeing everyone show up and show out,” Khan says. The run included opportunities for participants to donate period products, which were later donated to Heart Ministry Center in Omaha.

Founded under the premise, “When girls rise, we all rise,” Girl Up is a worldwide movement fueled by local chapters. The Nebraska 5K marked one of Khan’s passion projects inspired by her Girl Up experience.

Khan is not alone in her assessment of period poverty. Barriers such as taxes on period products, and lack of access to reliable transportation to stores where products are sold, exacerbate period poverty, experts say.

According to a 2020 research paper (“Period Poverty and the Menstrual Product Tax in the United States”) published in Obstetrics & Gynecology, nearly 16.9 million U.S. people who menstruate also live in poverty. Currently, neither WIC nor SNAP, which cover food essentials, cover period products.

Compounding the issue is a gap in education around menstruation, particularly for populations living in poverty, Khan says, along with a perception that “periods should not be talked about.”

One solution: Break the stigma. “Periods are natural. There is nothing shameful about menstruation or people who menstruate,” Khan says.

The Women’s Fund of Omaha is working to do just that, advocating for “age-appropriate, honest and complete information about sexual and reproductive health—including gender identity, sexual orientation, contraception, consent and healthy relationships,” according to Jill Heggen, communications director. The Women’s Fund fought to pass state legislation to remove the sales tax on menstrual products. The bill went into effect in July of 2022.

Community support. Clarity of message. Continuity of voices. All are combining to elevate Khan’s efforts to create change.

“Seeing others speak out and replicate period drives has been very inspiring,” Khan says of students in area schools who have initiated period-poverty projects of their own.

Looking ahead, Khan plans to continue catalyzing change after she graduates from high school.

“I just love community service. In college, I hope to establish a Girl Up club on campus, and offer free period products in all bathrooms,” she says.

She draws her passion from her parents, who she says support and inspire her. “I just love my parents. They are just so happy after they do something for others and are so involved in the community.”

The result: A student who lives to educate others. “It’s easy to give,” Khan says. “It’s important to elevate issues, to know what you want and to share the knowledge and skills you have with others.”