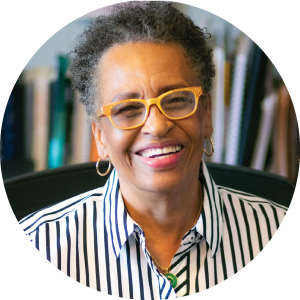 STILL SHOWING UP & STANDING UP

Donna Polk, Ph.D., serves as chief executive officer for the Nebraska Urban Indian Health Coalition (NUIHC) at an age when most people are a decade past traditional retirement. But Polk has never worried about doing things the way other people expect her to do them.

“There’s nothing traditional about me,” she says. “Maybe that’s why I’m still working and I’m 100 years old.” (She’s really 24 years younger.) And when she does eventually retire? “Maybe I’ll go on the poker circuit!” she says with a chuckle.

Polk was born in Denver, but because her father’s career was the military, the family lived in multiple places. Her mother was killed in a car accident in 1949. Polk considers her maternal grandmother, with whom she lived in California during much of her formative years, to be her strongest childhood influence.

“I was raised by my grandmother in a very traditional way and I was her first grandchild,” Polk says. “I have a picture of her when she was young, and she was so gorgeous. She was everything I always wanted to be.”

Polk’s grandmother taught her to sit up proud and straight, and took the young, avid reader to get her first library card. She was also a shaman with Comanche heritage who dispensed traditional medicine and was widely considered to be clairvoyant. Although she passed away when Polk was 9, she instilled in her granddaughter an interest in helping people.

“It ended up that I am in health care, which is like my grandmother but in a different way,” Polk says. “And I have been able to see things as they could be, which is kind of like being a visionary.”

Polk’s time in California with her grandmother also made a difference in another way.

Marriage to a military man first brought Polk to Nebraska, but a job kept her here and she has since chosen to stay. She likes being in a community that’s easily navigable, she says, and from where she can be anywhere in the country in a matter of hours.

Polk was nearing age 40 when she enrolled at the University of Nebraska-Lincoln to pursue a bachelor’s degree in counseling psychology. By 1999, she had earned a master’s degree and a Ph.D. In 1991, Polk had been employed by the Nebraska Department of Labor for 13 years when a counseling director position came up at the Lincoln Indian Center.

“It was karma, pure karma. I wanted to get out of state government. Then a friend called me and asked if I had a master’s in counseling,” she recalls. The position was initially temporary, with no benefits, and would mean a drop in pay, but Polk took a chance and it turned into something more. During her six-year tenure at the Indian Center, Polk developed numerous programs—including a domestic violence perpetrators group, anger management training, home-based therapy and the first minority HIV/AIDS awareness group. The position also led to her current role, which she has been in for 28 years.

As CEO of NUIHC, Polk provides oversight to a management team responsible for primary care, behavioral health, transportation, elders programs and intermediary services. She has also served on numerous professional boards and committees of organizations with missions and services related to her work, such as No More Empty Pots and Creighton University’s Center for Promoting Health and Health Equality.

Polk also has a history of activism with various organizations, including nationally known groups such as the Women’s Equity Action League and the National Organization for Women (NOW), as well as countless local efforts.

“If anyone said, ‘We’re starting a group to do this,’ I’d be right there,” she says, adding that she’s still involved in the community today. “LaVon Stennis-Williams just started a group called the Women of Color Nebraska Caucus and I was the first person to join.”

It’s still important for women to “show up and show out,” Polk says.

“There are more and more men out there that are vocal about what women should be doing. Why do you think they are trying to strip us of our rights to obtain any medical procedure we feel is appropriate? They want to tell us what we can and cannot do. Why do you think women are still dying, in my opinion, needlessly and prematurely from breast cancer? And look who controls the money? And this is something that has gone on forever. Women have the wealth but they give the power to men,” she says. “We cannot let things happen the way they’re happening. We cannot lose the rights that women fought for. We have to stand up.”

Even if it means facing risk, she says.

“I’ve stood up, and it cost me,” she says. A Klansman named Larry Trapp harassed and threatened Polk and others for years. The well-documented story was a dark experience that Polk says caused her to genuinely fear for her life.

“I knew people would kill you—like Malcolm and Robert and Martin and John—but I certainly wasn’t like that,” she says. She was targeted nevertheless, and it made her more cautious about how and when she speaks out. “It was life-changing.”

Polk has faced other hardships. She is a six-year breast cancer survivor, and the youngest of her seven grandchildren, an Omaha Central High School senior, also battled cancer (Burkitt non-Hodgkin’s lymphoma) a few years ago. Polk now has a special interest in the study of cancer in people of color—from genetic prevalence to environmental factors such as nutrition, availability of screening and even the stress of being a minority in modern American society.

She never ran for office, but she has been involved in politics. She believes she was the first person of color to be a delegate to the Democratic National Committee. “I went twice. One year I was selected and the other year I was elected,” she says. “And when I found out my name would be on the ballot I was horrified, because I couldn’t stand it if I lost.” Polk also wrote a letter to former Nebraska Governor James Exon in 1976 asking him to consider appointing her to represent the 46th district in Lincoln. The seat had opened up when the office holder resigned from the Legislature after being elected to the Public Service Commission.

“I ended the letter by saying something like, ‘You would always have my support as long as we agreed on the subject matter,’” she says, laughing at the memory. “And he picked JoAnn Maxey. She was the first Black woman to serve in the Unicameral.”

In 1981, Polk wrote a book called “Black Men and Women of Nebraska,” published by the Nebraska Black History Preservation Society, but don’t expect an autobiography to be forthcoming, she says.

“It would be too scandalous. I have four sons and I wouldn’t want them to really know their mom.”

She’s clearly amused at the thought, but Polk has lived—and still lives—a life we can all look up to. W