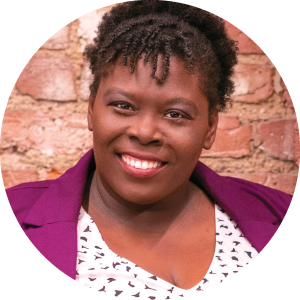 Imagine: A little girl discovers her passion for theatre performing in her parents’ living room in a neighborhood in North Omaha. She continues that passion through middle school, high school, college, graduate school and beyond, ultimately finding her niche in telling untold stories that help to create connections and heal wounds in a community that suffered decades of social injustice and isolation.

That little girl was Denise Chapman—now an actor, playwright, director, educator, social activist. “The theatre is the place that I found made the most sense and the place where I found the most joy,” Chapman says.  “It’s one of those things that I connected to early in life and then spent some time trying to figure out what that life looks like, especially in the Midwest.”

Chapman earned her undergraduate degree in theatre at Creighton University and her Master of Fine Arts in theatre at the Theatre Conservatory at the Chicago College of Performing Arts at Roosevelt University. She studied and worked in Chicago, but it was during her return to Omaha in 2006 when she found her voice, matching a passion for theatre and community in her hometown.

Since then, Chapman has worked as director/ensemble member with Blue Barn’s late night company—Witching Hour—and at the Omaha Community Playhouse as director of education and outreach. She headed up the new Performing Arts Collective at The Union for Contemporary Art when they moved into their new building space in 2016 and is now the program’s producing artistic director of theatre.

“Noticing with new eyes after having been away five years, coming back to this place that had fed me, that I grew up in and that helped shape the person that I was, I started having questions about why north 24th street looked so different from south 24th street, and why the growth and development that happened downtown and in Omaha overall was not happening in my neighborhood, the Miller Park and Florence areas,” Chapman says. “As an artist, I process those questions around the work. The thing that I can do best is to tell a story and hopefully in the telling of that story we are able to validate the experience of a community and shed light for people outside of that community to have a better understanding of why things look the way they do.”

Chapman is known for her work with supporting and directing Christopher Maly’s “Blues of Knowing Why,” a historical look at the life and impact of a 14-year-old girl, Vivian Strong, who was killed by an Omaha Police officer in 1969; as well as her own original works “More Than Neighbors” and “Northside Carnation.” In “More Than Neighbors,” Chapman examines the expansion of Interstate 75 North and its effects with three generations of a family central to the story. “Northside Carnation” is based on Mildred Brown, matriarch of Omaha’s north side and founder of the “Omaha Star” newspaper. It explores the triumphs and struggles of a leader and community during a time of great change and asks the question, ‘Where do we go from here?’

“By viewing untold stories we are able to understand the pain and trauma of 60 to 70-plus years of social injustice. By acknowledging these wrong-doings, we can begin to heal and grow as a community,” Chapman says. “I hope the work creates conversation that pushes toward changes in policy, both personal and political.”

She aims to normalize the “other” many people use to identify North Omaha by showing the how and why it is the way it is and illustrating the need for new infrastructural solutions to empower healing, growth and development.

“I hope to create a space with theatre, whether through something I have written or someone else has written, that we can sit in a room and see not only a different lived experience of people who look different but also to connect to that core human experience that we all share,” Chapman says. “We all understand loss on some level, we all understand injustice, we all understand that feeling of being ‘other’—or outside of—in some way. If we can make those types of connections then what is perceived as the violent side of town can be seen as looking at 60 to 70-plus years of redlining, social injustice, economic injustice and suppression that has created an environment where people are doing the absolute best that they can in a lot of ways, but there isn’t strong infrastructure for people to make a lot of different choices.”

Chapman says working at The Union for Contemporary Art and running the theatre has given her the opportunity to have the home base of support required to make the work and also grow a community of artists interested in doing this type of work.

“The organization’s mission is to strengthen the cultural and social landscape of our community by using the arts as a vehicle to inspire positive social change,” she says. The Union’s Performing Arts Program is dedicated to the development of professional theatre artists and thought-provoking productions that reflect authentic and diverse narratives about experiences within the African diaspora. The Performing Arts Collective is The Union’s Black theatre ensemble dedicated to exploring contemporary theatre.

“I think it’s important to have culturally specific theatres, also for our Latino folks and Asian folks, where their culture and stories can be preserved and celebrated,” she says, “allowing people outside to come in to learn and experience that within all the ways we are different, we are the same.” W

I watch her direct a great show called Juneteenth. The kids and adults did a great job on that play. I would let my son do another play with her. She is amazing smart and very very good at what she does.