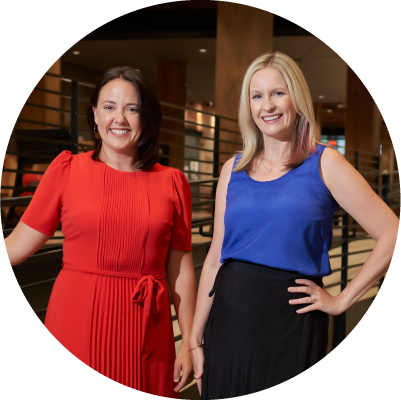 Running Down a Dream

When longtime friends Denise Blaya Powell and Leanne Prewitt returned from the 2017 Women’s March in Washington D.C., they were fired up and ready to go. But like many women, they were fired up about so many causes, including gender equality and women’s rights, LGBTQIA+ rights, immigrant rights and civil rights, just to name a few.

They’d already been exhausting themselves with organizing, letter writing, petitions, rallies and other such efforts, hoping to facilitate policies that would uphold their values and support their causes.

“It all felt less effective than we wanted,” Prewitt says. “We were getting form letters back from our senators, we felt spread really thin, and there were too many causes we cared about.”

Blaya Powell and Prewitt knew it was time to reevaluate and refocus their efforts more strategically. With that, the seeds were planted for Women Who Run Nebraska (WWR), which the pair co-founded.

“We had this desire to really focus our efforts and find the one thing we could do to make the most impact, and we landed on getting more women elected to public office,” says Blaya Powell.

“At this point in 2017, Denise and I knew very little—to this day, we’re still not politicians—and we still don’t know all the ins and outs. But we know how to have parties, so we know how to bring people together. We’re both marketers, so we know how to tell a story and get people behind you,” says Prewitt, who serves as President & Chief Creative Officer at Ervin & Smith and Director of Marketing at WWR.

Blaya Powell left Alley Poyner Macchietto Architecture in August 2021, where she’d been a partner for six years, to make the exciting leap to full-time director of civic engagement at WWR.

They’d invited several women candidates for 2018 local and regional offices. The event was a hit. Candidates and attendees alike asked, “When are you doing this again? What are you doing next?” Blaya Powell and Prewitt knew they were on to something. They started doing more events, christened their effort “Women Who Run,” created a Facebook page, offered trainings on supporting candidates and running for office, and added swag. The marketing-minded duo’s early swag orders included a branded t-shirt, koozie and tote bag—the first pieces of a swag inventory that’s now legendary among Nebraska women.

Blaya Powell and Prewitt say candidates were thankful but started to wonder if the pair could help them with campaign fundraising.

“People coming to our trainings said, ‘No one else is doing this. Thank you for filling this gap.’ Candidates thanked us for bringing people to their events. Everybody loved what we were doing and didn’t want to downplay that, but we kept hearing from candidates that there is a huge financial aspect to campaigns. “Like, thank you for the cheerleading aspect, it’s so important because it builds excitement and momentum, but there’s this other side of it, you can’t win without money,” Prewitt says.

That clear need motivated WWR to evolve into a political action committee (PAC) in 2019, one that would support candidates whose platforms aimed to improve the lives of women and girls. Blaya Powell and Prewitt were intimidated by the prospect of forming a PAC but were inspired by the example they saw in candidates. The need for fundraising was exacerbated by the fact that, when the duo reached out for help, national organizations showed little interest in spending their time or dollars on Nebraska campaigns.

“We realized, no one else is going to do this. We’ll do it and we’ll figure it out. That’s a lesson we learned from a lot of those candidates who ran, because they found something frustrating and decided to do something about it. They found it inside themselves to say, ‘I’m going to run for School Board. I’m going to run for Congress. I’m going to run for State Legislature. Why not me?,’” says Blaya Powell. “I think that inspiration and network is the best part of WWR because it’s really difficult to run for office— mentally, physically, emotionally draining.”

Blaya Powell says the strong network of women they’ve built is a highlight of their work. They meet up to support each other, canvas together, drop each other’s lit and spread the word for each other. Blaya Powell and Prewitt agree it’s been gratifying to watch this continue to snowball into an even larger network of support for the candidates and a growing following for WWR.

Prewitt says this strong network also helps direct much-needed energy into down-ballot races. For example, she says it’s difficult for busy voters to attend a dozen events, but when you bring a dozen candidates together for one event, candidates and voters can cover much more ground. In addition to helping candidates gain visibility, WWR also aims to demystify elections for voters and help them get involved at any level that feels right for them.

“Our main mission is to support the candidates, but we also want to create an entry point for regular people to be involved in politics. It can be intimidating, and we wanted to create a space that’s accessible. You just come to this party and buy a cute tote bag and feel like you’re part of something. Then that can break the ice for them to get more involved next time,” Prewitt says.

As far as the candidates WWR supports, the organization is officially nonpartisan. Their criteria is “progressive candidates who advocate for policies that move women and girls forward,” according to their website, but the women emphasize that “progressive” is with a “little p.” Ultimately, WWR is simply invested in promoting the cause of women and girls.

“We want to remove barriers for all women to run for office, knowing that will further our mission to support women and girls in our state. One message on our merch says ‘Vote for Women,’ but it’s two-fold: It’s vote for women in a literal sense and then vote for women in the sense that the candidates you vote for are putting forth policies that support women and girls. So, that could even be a male candidate, in a race between two men,” Prewitt says.

Blaya Powell and Prewitt say even though COVID-19 presented a huge speed bump for WWR, and in a huge election year, it ultimately helped them get creative and further their efforts. For example, taking events to Zoom let them better connect with women in Central and Western Nebraska—something they’d repeatedly discussed the need for, but hadn’t yet found the bandwidth for.

“Suddenly, we’re having Zoom calls with groups of women out in Schuyler and Lexington. We could’ve always done this, but it just never occurred to us,” says Blaya Powell.

After their considerable impact on Nebraska political culture, who’s running for office, and candidate fundraising, WWR is now gearing up for big elections in 2022, 2024 and beyond.

“I hope people hear our story, see what we’re doing, and walk away knowing: If you have an idea or there’s something you want to do, just start doing it,” says Prewitt. “We didn’t stop and go get degrees in political science before we founded this. We didn’t have time. We just went for it. We’re women, and women can figure things out. We build networks, we pull together, and we ask other women for help when there’s something we don’t know how to do.”