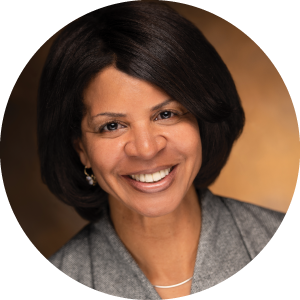 NO STRANGER TO EDUCATION

Omaha Public Schools (OPS) Superintendent Cheryl Logan, Ph.D., was enjoying a winter holiday concert at one of the district’s schools last year when lyrics sung by children struck her as especially apt:

We are not daily beggars
That beg from door to door,
But we’re the neighbours’ children,
That you have seen before.

“I love the song ‘Here We Come A-wassailing,’ I always have,” Logan says. “At the moment I heard that—and I’ve heard it a hundred times before, maybe a thousand times before—that to me frames up how we have to think about our children: They are all of ours.”

Logan joined OPS in July 2018 with two historical firsts for the district: she is the first woman and the first person of color to be the superintendent. The East Coast native has degrees from the University of Maryland, Johns Hopkins University (Maryland) and University of Pennsylvania. Her educational experience spans classroom teaching; school administration positions; and, most recently, serving as the chief academic officer and assistant superintendent for the School District of Philadelphia, which is the nation’s eighth-largest school district and serves more than 200,000 students.

“I certainly am a long way from Maryland, where I was born and raised,” she says. “I think many things appeal to me about Omaha. It’s a thriving system and a growing system. The student profile, the diversity here, very much appeals to me. It’s a very supportive community for public schools. And the size of the district—it’s like the ‘Three Bears’—not too little, not too big, kind of just right,” she says. “I felt that, based on the experiences I had prior to being selected, I likely had a lot of experience that could potentially bring value-add to the team here in Omaha.”

Her fluency in Spanish was another good fit.

“I have served English-language learners for a quite a long time. I’m bilingual, so I think that helps in a couple of ways. In its most basic form, just communicating with a large sector of our parents and student community. Our school district is about 38 percent Latino today,” she says.

Logan says she understands what it’s like to struggle to learn a second language and what it’s like to think in another language. “Those are things that help me understand and value what folks who come from places other than the United States bring and the richness of the fabric of Omaha. These are not strangers to us. They are neighbors. They are children of our co-workers, or the people who we get our hair done with, or the people we see in the gym or grocery store.”

Logan doesn’t want to be a stranger, either. She’s not above posing for a sweaty selfie with a district parent who recognizes her at the gym, and she gets why a teacher running into her at a store at 6:30 a.m. or a student seeing her out and about with one of her three dogs would be tickled. People may view her as a role model, but they like to know she’s a real person, too.

As much as she loves her home state of Maryland, Logan says she already feels comfortable in her adopted community.

“The United States is not that much different region to region. Wherever you go, there’s going to be a Home Depot, a PetSmart, a Target and a Walmart,” she says. “The pace may be a little different, but what people want out of life, their hopes and desires and dreams for their children are the same wherever you go in the world.”

Logan and toy poodle Coco and bichon Lola have all settled in nicely to their new home. Sophie, who was named by students at Benson West and is training to be a therapy dog, joined the gang  last December. “She’s a big, goofy standard poodle,” she says.

Logan’s daughter Cassie is now a third-generation teacher, following her mother and grandmother. “She’s the light of my life. She’s a joy,” Logan says.

Engaged to be married, Logan recently had co-workers speculating about a trip to Las Vegas. But she predicts she and her fiancé will simply “just turn up married” one day.

Now in her second school year with the district, Logan says her role is to look ahead with a big-picture perspective.

“My biggest goal right now is about our strategic plan of action. I really believe we’re at a pivot point and we literally have to prepare for automation, we have to build five schools and as drastically as our world has changed in the last 10 years—and it has been drastic—we have to prepare for an even more drastic change between now and 2030,” she says. “In 2030, the leading edge of millennials are going to be approaching 50. And there will be a billion people on the planet over 65. In Omaha, 20 percent of the people will be over 65 in 2030. A community has to prepare itself for people working longer, it has to prepare itself for a whole sector of jobs that will become automated. It has to prepare itself for young people who are not going to stay in one job for 10 years, let alone 30, right? To me, that’s so exciting because I will be school superintendent when that’s happening. Our Kindergarteners right now are the class of 2032.”

The district must assess its programs and determine what moves forward, what is discontinued and what should be added, she says.

“The world has transformed so much for young people that the teacher is not necessarily the arbiter of knowledge in the classroom. Kids have access to lot of information, so our job is to help them curate information. That’s a huge shift for educators. For me, all of that is so exciting,” she says.

“Education industries typically always lag, and we’re lagging, but I’m trying not to have us completely lag, and with this strategic plan of action make sure that we’re thinking about it, that we’re planning for that huge shift.”

Logan says she would like to see herself serving as superintendent of OPS until retirement. And more than three decades into her career, her appreciation for the value of education has never wavered.

“Education changes the trajectory of lives. It doesn’t change the trajectory just for that one individual but for everyone who comes after that individual: their children and grandchildren and those generations they will likely never meet,” she says. “That’s the promise of public education in the United States.” W

So far Dr. Logan has seemed open to “hearing” and “responding” to the community that she serves. We are hoping that her openness continues.