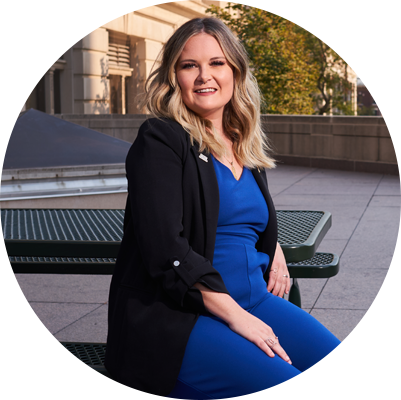 During the pandemic, some people focused on new hobbies, such as nurturing a sourdough starter or knitting. Chelsea Souder started an abortion fund. Until January of 2022, there was no state-wide abortion fund in Nebraska. When COVID-19 happened, her family’s life also changed dramatically. “I was at home. I was also newly pregnant with my fourth child and all of my experience is in abortion. I’m in Nebraska, and I’m like, ‘What am I going to do?’ Because there’s not a lot of opportunities. I knew from working in the clinic and from all of my experiences that there was a big gap in terms of abortion funding here.”

Her knowledge of working with funds and a healthy networking base combined with her fierce spirit provided her with the footing needed to create Nebraska Abortion Resources (NEAR.) She made it official in July of 2020 and began assisting clients in January of 2022. NEAR’s mission is to remove barriers on every level for Nebraskans seeking abortion access.

On June 24th, 2022, when the Supreme Court overturned Roe v. Wade, NEAR raised more than $200,000 in the first month alone, allowing them to triple their budget for callers.

Her budget began at $800 a week in the beginning of the year, but since the Supreme Court decision, NEAR has tripled their budget to $2,400 a week. But that still doesn’t meet the need. “We’re seeing so many people who are flocking to Nebraska now,” she says.

NEAR belongs to the National Network of Abortion Funds, a network of grassroots organizations building power to remove financial, logistical, cultural and political barriers to abortion access.

Abortion is now illegal in Wyoming, South Dakota, Missouri, Arkansas, Louisiana, Texas, Kentucky, Oklahoma and Mississippi. In 10 more states—including North Dakota and Idaho—abortion is “legal for now,” according to governing. com’s Abortion Map 2022, and in Ohio, South Carolina, Georgia and Florida, the right to an abortion is limited.

While obtaining her Master’s degree in Public Health from UNMC, Souder traveled to abortion clinics in Nebraska to interview people trying to get abortions to understand their experiences. “It really opened my eyes to what people were going through.”

Her takeaway was that there was no singular abortion narrative. “There are a million and one reasons that people get an abortion,” she says. She also spent four years at an independent abortion clinic in Bellevue. As project manager, she helped establish a logistic center between a Planned Parenthood affiliate and an independent clinic in Southern Illinois. This past May, she purchased the clinic, Hope Clinic for Women in Granite City, Illinois, and is serving as the interim chief operating officer.

With the minimum cost of abortion beginning at $700, Souder says about 40 percent of patients need financial assistance to get an abortion, but that number has since risen. While most of the money is spent on the actual procedure, the fund also offers practical support. “This includes anything they would need to get to or from their appointment,” she says. NEAR also helps with gas money, hotels flights and, in some instances, childcare expenses. For some to travel out of state, total expenses can reach above $6,000.

Souder’s organization includes six board members and seven active volunteers. “We also rely heavily on the Chicago Abortion Fund. They were really gracious when we formed to offer to do our intakes for us.”

Megan Jeyifo, executive director of the Chicago Abortion Fund, works with Souder and NEAR. “Illinois has been a regional access point for people around the Midwest for a really long time,” she says. “The years of abortion restrictions around the Midwest were causing people to come into Illinois to access abortion care.”

In Illinois there was more financial support available. “We thought we shouldn’t be forcing people to leave their homes just to access our support, so we began supporting people around the region who were also staying home. A couple of years ago, we noticed we were getting calls from this clinic in Nebraska. And there was no Nebraska fund currently. And before you knew it, we were spending $40,000 annually in Nebraska,” Jeyifo says. “When Chelsea reached out last year and told us she was starting a Nebraska abortion fund, we were thrilled because we had been supporting Nebraskans for some years.”

Jeyifo says she loves working with Souder because they’re both working moms. “We’ll be talking on the phone and in the background, all you can hear is complete chaos.” Both women say they like helping people decide whether to start or grow a family.

“Chelsea understands that access to abortion isn’t just an economic or racial or gender justice issue,” Jeyifo says. “I think that’s where she is grounded. She’s tenacious. She really will do what it takes to get people from point A to point B.”

When Politico published a leaked draft of the Supreme Court decision in early May of 2022, Souder was returning from a conference and remembers crying for two hours during her layover at the Atlanta airport. “Even though we were all expecting it, it was like a really huge gut punch. I just kept thinking about all the people’s lives that are at stake, and their futures and their ability to plan their families and thrive and the way that they should have that opportunity.”

She had just attended a conference with many clinic owners and leaders in the movement. “I also had a really immense understanding of what that meant for so many people who have put literally their entire life into this work, and it’s just now gone?”

After some time, she was able to get it together. “We gotta get back to work,” she says.

The next day, Souder spoke at an abortion rights rally in front of hundreds outside the Omaha and Douglas County Civic Center. She remembers she was chatting with Andi Grubb, the state executive director of Planned Parenthood, when someone from the crowd approached her.

“She was just crying. And I had no idea who she was. She thanked me because our fund had supported her abortion access,” she says. “It was really, really cool to be connected with them that way. It reminds me of how desperate so many folks are to access something that is so basic. It is a right, that has now been stripped away from them in little nudges over the last few decades, but now you know is completely wiped away for so many millions of people,” Souder says.

“It’s unfortunate that it has to be this way. I love that we can do it, but it’s just wild to think [we have] this very difficult system of crowdsourcing money to access some healthcare, right?”

Souder says the best way to help is to donate. “Donate to your local abortion funds, wherever you are, because they’re the ones, regardless of what happens state by state, they’re the ones who are going to continue to make sure that people can travel and get access.”

She also advises working on destigmatizing abortion. “Say the word, ‘abortion.’ Talk about it in your circles and your networks.”

For help with an abortion, call NEAR’s partners at the Chicago Abortion Fund at 312-663-0338 or visit NEAbortionResources.org/Need-Help.