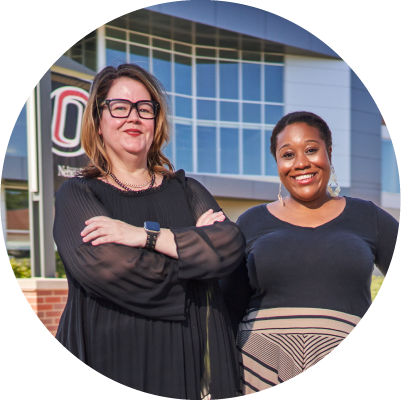 Soulmates is a heavy word. It’s a title that indicates a strong bond between two individuals, drawn together by something akin to fate. Not necessarily romantic in nature, soulmates are two people whose lives simply seem to intertwine compatibly with one another.

“She’s my influential person,” Wood says about Co-Executive Director Watkins when asked who inspires the work she does at Inclusive Communities. “Our lives have kind of circled each other ever since we met in 2003.”

That fateful meeting took place at CDI Head Start, a non-profit organization that works with low income families to foster quality services in the community. Wood had recently moved to Omaha a few years prior, and still remembers the impact Watkins made on her while they worked together at Head Start. This was a woman Wood knew she wanted to work with again someday, in some way.

Wood made sure to keep in contact with Watkins as she went on to plant her roots in the Omaha community: Opera Omaha, Film Streams and Planned Parenthood of the Heartland to name a few. Their paths would intertwine throughout the years, and the bond of their friendship deepened.

Watkins, unlike Wood, is an Omaha native, born and raised in the community she lovingly refers to as “a city with two degrees of separation—you always know someone who knows someone.”

There wasn’t always a clear career path derived for Watkins, but there was a clear drive to do good in her community. A student of child psychology, she found the subject matter interesting but didn’t see herself as a therapist. The call to help make a difference in the lives of Omaha youth is what lead her to Head Start, and “following fate”—in her own words—had worked out pretty well for her.

But the results of the presidential election of 2016 marked a turning point. There was a palpable divide in the country, something that felt greater than before. And Watkins felt she could be doing more: Reconnecting communities. Bridging a gap. “Bringing us back to ourselves,” she says.

Wood had recently stepped into the Executive Director role at Inclusive Communities in 2015. When Watkins reached out to her in late 2016, she laid all of her cards out on the table, including an impressive resumé cultivating change in the Omaha community through her work at places like Opera Omaha, Habitat for Humanity and Sierra Club.

But she was hungry to elevate her mission and working at Inclusive Communities felt like the natural next step. When Wood informed her that their small team was looking for a Deputy Director, it once again felt like fate.

“Once you step into the role you’re supposed to step into, things start happening fast,” Wood says about their positions at Inclusive Communities. For these two women, both driven to make positive changes in the city they love, the sentiment couldn’t be more true.

Their combined passion has helped result in diversity and inclusivity programs in Omaha’s businesses and organizations. During this moment in history, where social justice work has never felt more important, Watkins and Wood are encouraged to see others wanting to make a difference, too.

An increasing number of Omaha organizations have approached Inclusive Communities, seeking to educate and reform. According to Watkins, 40 percent of their clients are from the corporate world, and 20 percent are from nonprofits. And the push for systematic change through dismantling stereotypes and conversations around intersectionality are keys for continued success.

Seeing Omaha businesses want to make changes in equality has been one thing, but for Wood and Watkins, being able to impact youth has been incredibly rewarding on a different level. When it comes to the young students who come through Inclusive Communities’ programs, these two women feel motivated to craft a better world for them. A world that they deserve.

“They are so brave for expressing themselves,” Wood says, speaking about the youth in their programs. “And so we have to get the world ready for these students, because they have high expectations for how to be treated as humans.”

Effecting change on a global scale might seem daunting, but Watkins feels strongly that Omaha is the ideal size of city to see a ripple effect. “With that smalltown feel, the possibilities for connecting are greater,” she says. “It gives us a chance to create meaningful change.”

At Inclusive Communities, both women have been able to leverage their individual strengths to create system-wide reforms. The ability to push one another as well as support one another made this duo a powerful force in the community.

Their informal shared leadership approach at Inclusive Communities eventually led them to institutionalize it.

Naming Watkins a Co-Executive Director alongside Wood was only a natural decision, they say—one that was in the making ever since Watkins was brought on in 2017. Watkins credits Wood for being the only leader in her life that constantly saw her brilliance. “And she worked every day to make sure I also saw it in myself,” she says.

Some people may not ever find their soulmates in this life, but it’s a no-brainer to see that Maggie Wood and Cammy Watkins have been extremely fortunate to find each other. And the city of Omaha is lucky to have found them.