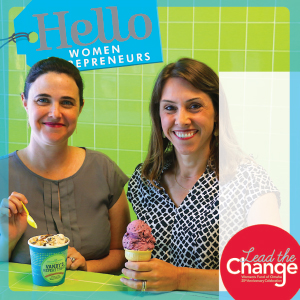 About eight years ago the founders of eCreamery, Becky App and Abby Jordan, were having a bad day. Their ice cream machine broke down and the new parts to fix it no longer existed. App, an admitted Type “A” personality, wondered if they would have to shut down the business.

Undeterred, the resourceful Jordan fixed the machine with a common household object—a rubber band. Through problem-solving and persistence, Jordan saved the day.

Almost a decade later, the company is a well-known Omaha staple. A brightly colored parlor in Dundee, eCreamery is a local favorite. It’s hard to choose just one flavor from the selection of homemade ice cream, gelato and sorbet.

After appearing on the popular start-up seed money show “Shark Tank,” and walking away emptyhanded, they returned to Omaha and followed through with their vision of selling custom-made ice cream as a personalized gift online, rather than a self-consumed food commodity.

App and Jordan met while working in the corporate gift department at Borsheim’s in Omaha. “We had seen the value of a highly emotional personalized gift and the value that it gave to people,” App says. “We applied that personalized power of a gift to ice cream.”

Their single investor is Mark Hasebroock of Dundee Venture Capital. He played a big role in revitalizing the Dundee area. Before the location at 50th and Underwood was an eCreamery, Hasebroock had opened a Ted & Wally’s ice cream store there. According to App, the sales suffered due to Nebraska winters and a shortage of parking in the neighborhood, so Hasebroock relied on what he knew best—eCommerce. He suggested the idea of also selling ice cream online. “Everybody thought it was crazy, except for Abby and I,” App says.

Their business has thrived during a challenging economy, and they have recently celebrated a partnership with Omaha Steaks. “These were some very strong goals of ours in the beginning. We’re meeting these goals. We’re doing things. We’re really proud,” App says.

With each new exciting occurrence, whether it’s being featured on “The Price is Right” or having a presence on Harry and David’s Gourmet Food website, the partners maintain their roots. “The point of business is to grow and expand, so we’re never going to feel like we’ve made it,” App says.

It is their precise differences in personalities that make their working relationship a success. “One of the things that helped us in the beginning was having the right partner. We really are balanced,” Jordan says. “If she is upset about something, I have a way to figure it out. And when I’m upset, she usually has a way to logically think about it.”

App says that the two are polar opposites who will often see an issue from opposite sides and debate it with a rational approach. “We meet in the middle, which is a better decision than each of us would have to come to on our own,” App says.

Jordan is the early bird, rising before 6 a.m. to check on orders, get status reports and coordinate the flow of their three different operations; the parlor, their East coast fulfillment center and their newly opened production facility at 136th and Q.

“At the end of the day, I’m the night owl. So while Abby’s up early, I’m usually the one on the computer up until the late hours of the night,” App says. eCreamery’s name went worldwide the day Sir John Paul McCartney stopped by with his pal Warren Buffett for a few scoops of Best Vanilla Bean and a root beer float. The moment was captured by a young man in a selfie that went viral.

It was a busy day for App, who had just celebrated her son’s birthday party. She was wrapping up some business in her dining room on her laptop in the dark. “My phone just starts lighting up. On Facebook someone had tagged me.”

“We had retweets from Indonesia,” App says.

The duo advises those looking to start their own businesses to be prepared for the challenges. “Be ready to be a scrapper and roll your sleeves up and clean toilets. You can be the CEO, but you’ve got to clean the toilets,” App says.

Jordan says being an entrepreneur will consume you. “Go to people who are going to give you their honest opinion. Don’t go to your mom. Get some honest feedback, because it’s going to take a lot.”

They admit that despite all of the hard work and sacrifice, they are living the dream. “We’ve crafted this career for ourselves and we’re very thankful we’re able to support our families,” Jordan says.

And in turn, they have helped create jobs for high school students, allowing them to save for their future. “So many kids have gone to college on eCreamery paychecks,” App says.