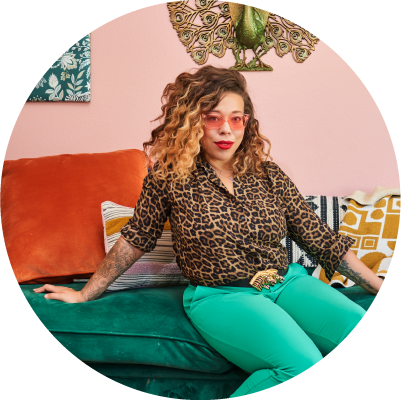 Stories to Entertain, Educate and Inspire

Beaufield Berry-Fisher does her best work in bed. That may sound salacious until you learn that her line of work is storytelling. Regardless of the various means she employs—plays, podcasts, novels, journalism, TV or film—her powerful words paint stories worth a thousand pictures.

When asked how she keeps so many storytelling plates spinning at once, she wryly but in all seriousness says, “I really do as much as I can from bed. Whatever I can do from bed, I’m there,” she says.

Whether writing her latest play, penning lyrics for her upcoming Black cowgirl musical, or filming smart, endearing TikToks and Facebook lives, Berry-Fisher is a consummate teller of tales. Her theatrical work prompts audiences through laughter, tears and careful consideration, featuring characters (both real and fictional) whose experiences range from blissful tenderness to abject horror, and all stops in between.

Berry-Fisher says her penchant for storytelling started with a childhood habit of fibbing, which quickly morphed into a strong love of theater.

“Theater was a natural outlet for telling stories and I’ve always been fascinated by the way other people live and perceive the world,” she says. “I think that lends itself to empathy, understanding and being able to meet each other halfway—learning how to work and communicate with other people. Storytelling brings us together.”

Particularly in an era so dominated by division, it takes a deft hand to bring people together. Berry-Fisher’s work has the strategy, nuance, imagination and heart to accomplish this feat of connectedness in a dark theater of strangers—and that’s by careful design.

“Often, when I’m doing a show or working on a script, I’m looking for ways to authentically tell my people’s story, but also ways it can connect to every person in the audience—people that come from all different backgrounds, have different fundamental beliefs and different politics. What’s the one thing that can bring us together in this moment? Where can you find yourself in someone else’s story? I think if we did more of that, we’d have a little more unity,” she says.

Berry-Fisher was born and raised in Omaha, moved away for a spell, and has been back about a decade. Several of her works are set in Omaha and/or inspired by her local kin. In fact, she says family ultimately helped reignite her love for theater and fostered her work in important, life-changing ways.

“[GPTC] is really where I rediscovered myself and my people. Theater was my religion, my soul. When I came back to it in a serious way, more ready, older and wiser, I think things fell into place because it was the right time,” she says.

Berry-Fisher later wrote, acted and directed there, and made herself the “unofficial ambassador” of GPTC—chauffeuring “Broadway playwrights in my hooptie car.”

More waves of fate and certainty rolled in when Berry-Fisher became pregnant with her first child, son Shine, now 7 years old. She says being pregnant “lit the fire to do all the things” as she committed to motherhood and recommitted to herself.

“That was the switch that clicked, and I went from being a participant to being a career playwright,” she says.

In the Upper Room was the show that next pushed her trajectory forward. A finalist for the Eugene O’Neill Theater Center’s 2018 National Playwrights Conference, the play will open its world premiere run in February 2022 at the Denver Center for the Performing Arts.

“I was pregnant with my second child (Oscar, now 4) when I wrote In the Upper Room. It’s a 100-page play written in three nights in the dark of my husband’s office . . . I really felt my family and ancestors who’ve passed away were in the room. They were haunting me. They were writing this script for me. When I pushed ‘The End’ on that piece, I said, ‘I think this is the best thing I’ve ever done.’”

But that superlative gained serious competition when Berry-Fisher’s Red Summer premiered at the BlueBarn Theatre in Fall 2019. Red Summer tells the story of Omaha’s 1919 race riots with a focus on Will Brown, the Black man unjustly at the center of the riots, who was brutally lynched in Omaha in September 1919. Brown’s torture and murder by an angry white mob was merely one chapter of an era (on the heels of World War I and a few years into the Great Migration) so violent and gruesome it was dubbed “Red Summer.” The world premiere run sold out, shows were added, then sold out again.

Red Summer is a powerful, poignant work that looks at the macro and micro of the matters at hand, layering the larger historical context with who Brown was and who he might have been, in all his full humanity. By turns, Red Summer unspools a buoyant story of blossoming love and hopefulness, then sickens the audience with the real-life injustice they knew all along loomed in the background like a boogeyman. Only this monster was a tragic collective of regular people, egged on by racial anxiety and tension, bad information and mob mentality.

When Berry-Fisher was doing press for Red Summer, she witnessed the parallels between history and present.

“I realized, there’s still a mob mentality. You just have to be in the comment section to see it. It’s people who do not want to learn about racism or anti-racism, or anyone who’s oppressed or has a different story than God, whiteness and Nebraska Huskers. That’s why ‘Nebraska Nice’ doesn’t hit the same for people who aren’t in certain demographics,” she says. “From a foundation of truth, we can all heal together, but there are people actively fighting against telling the truth or learning the truth, and that’s hindering so much progress.”

But despite such willful ignorance, Berry-Fisher is committed to telling stories that plant seeds of understanding.

“When you come into a theater, I get to tell you a story. You get to find yourself in that story, then walk away with something that’s just for you. I don’t even know how the seeds planted in my work can affect you. You may not even know. You may not see them immediately; but I know when I’m walking in truth, I’ll reach more people through art than I could ever reach on the platforms we communicate through on a regular basis,” she says. “It’s important to me that even though the shows are entertaining, by telling the truth of the story I’m not sugarcoating it. But I’m delivering it in a way that you can actually ingest it instead of pushing back against it. That’s my gift to you, and you can open it or not. I just give you the gift, then you decide.”

Berry-Fisher encourages people to put themselves inside of someone else’s story to gain a greater understanding and clarity of humanity, whether through theater, literature or genuine conversation.

When Berry-Fisher was pregnant with her third child, daughter Georgia, now 18 months old, she hid her pregnancy from everyone but her inner circle. She says she didn’t want to face the stigma that she’d be distracted or unhireable and lose opportunities, which she had experienced when pregnant with Shine and Oscar. She went through the emotional upheaval of that career concern and then, COVID-19 hit.

“When COVID hit, the theater world flatlined. And I’d hid my baby, the joy of my life, to please other people and now the whole world had stopped and we’re all on the same level. I’ll never do that again. I’ll never pretend to be something I’m not or hide who I am to impress or please other people. It was a huge lesson,” she says. “When I think about the toll 2020 took on women, in the home, the workplace, or usually both, it really spurs me to create change.”

Berry-Fisher’s next theatrical piece, Buffalo Women: A Black Cowgirl Musical Dramedy, will premiere at the BlueBarn in May 2022, then go on tour. The piece follows “hidden figures on the frontier” just after Juneteenth. It was inspired when Berry-Fisher came across a book called African American Women in the Wild West and felt a “zing.” After devouring the book, she started writing songs in the shower, recording her renditions with sounds of water running, claps and slaps as percussion. She later played her shower songs for J. Isaiah Smith who agreed to be her composer.

“I am so thirsty to write a musical and I love country music. Black women, in the wild west, and country music—it’s just all a ‘yes.’ The roots of country music are Black and we’re telling Black women’s stories. It’s all so natural,” she says.

A staged workshop preview version of Buffalo Women ran at the BlueBarn in June 2021, with Berry-Fisher acting as an onstage tour guide through the production in progress and the playwright’s process.

“I love working with BlueBarn because there’s so much trust there. It was Susan’s idea for me to be on stage doing the narration,” says Berry-Fisher, referring to Susan Clement-Toberer, BlueBarn Producing Artistic Director and Red Summer Director. “Everybody loved that, and I thought it was genius. There’s a camaraderie there where we can just give and take, creatively and freely.”

Squeezing Berry-Fisher’s multitudes in one article is challenging, but alongside her playwriting career she also published 2017 novel Childhood Friends, co-founded the Village Co-Op school in 2020, launched the Say Her Name podcast in 2021, and recently began TV/film work with Blooming Berries Productions, a new family-powered outfit. Despite the heavy load on her many spinning plates, Berry-Fisher says she gets it all done by understanding her own priorities and knowing what not to do.

“I don’t take on things I don’t have capacity for, and that’s something I’ve really learned. I’ve got a ‘yes’ tattoo on my arm, but that’s from a very different time in life. So, I’m going to get a ‘no’ tattoo, because it’s really about prioritizing what you love to do and being able to say no, even in love, to other things.”

Berry-Fisher says she hears women, while stacking themselves up against other women, say they “could never” do some of things they admire in others or see others accomplishing.

“You literally can. I don’t mean that in an ableist way, I mean we’re told that we can’t do certain things from a young age and made to compete with each other. Before [women] can even exercise the muscle of ‘I can,’ they’ve already learned the language of ‘I can’t.’ It’s about reclaiming your time, headspace, and brave parts, and not letting anybody take that from you,” she says.

Beaufield Berry-Fisher’s Buffalo Women: A Black Cowgirl Musical Dramedy will run May 26 – June 19, 2022, at the BlueBarn Theatre. The Say Her Name podcast is available on Apple podcasts and Spotify. Several of Berry-Fisher’s plays are available to read at newplayexchange.org/users/1733/beaufield-berry.