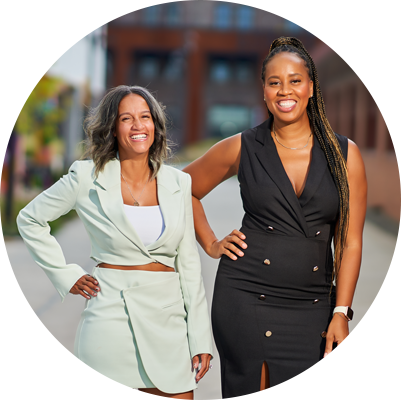 Closing a Gap with a New Perspective in Construction

Not your typical construction workers, Maranda Adams and Ashley Kuhn founded Blair Freeman Group in 2018, a not-so-typical construction company with the sole purpose of making a difference and closing a gap they found in the industry. Blair Freeman boasts talented crews for both residential and commercial projects and provides owner representation for real estate development. The need for a new perspective became obvious when Kuhn assisted Adams in sifting through the weeds of an overwhelmingly difficult commercial development venture in 2017.

“It got to be such a challenging project from dealing with the city to the contractors and just navigating all of the red tape,” Adams recalls. With over two decades of experience between them in finance and real estate, they couldn’t help but wonder how many people abandon their dreams for lack of support to lean on when faced with similar challenges. “So we decided to make sure other people don’t run into those same obstacles. We wanted to figure out how we can do construction differently; how we can support people, businesses and owners differently,” Adams says. “We sat at a table one day and said ‘We can do this. We can do it well and we can impact our community while we’re doing it so let’s do this’. And that’s how Blair Freeman was born.”

The company’s beginnings were bold. “If you think about it too hard, you’ll convince yourself that you can’t do it. So we talked about it just enough for it to make financial sense, just enough for it to make sense with our families and husbands and we went for it,” Kuhn says. “We pinch ourselves daily. We would’ve never dreamed four years ago that we would be here today.”

Successful from day one, each year the company grows and expands to meet demand. “We didn’t hire our fist employee for almost an entire year,” Kuhn says. “We were the ones in the trenches doing the work, day in and day out. Boots on the ground, dirty, dusty, trying to figure out how to get from crawling around in a ceiling to a meeting with the mayor in the same day!”

As the business grows, they spend less time in the field and more time as the face of Blair Freeman, she adds, but they are generally on the job site when projects are in the final stages, buttoning up the last details.

“But we also never want to ask our employees to do something we wouldn’t do ourselves,” Adams says. “We randomly show up on job sites and get in there and help.”

“We have truly been blessed to have a great team with so many different experiences. We have people who have just killed it in residential and we have people with commercial experience that you’ve never seen before, so we have the ability to pivot and do residential and commercial projects.” Adams says. “We understand that these big commercial projects need to get done but we also understand that there’s people who want to call somebody that they know and that they trust and feel comfortable with to do those smaller projects—the kitchens and the bathrooms. So that’s why our team is so unique.”

Relatability and perspective are qualities that set Blair Freeman apart, Kuhn says. “That’s a big part of our beginning. Impact does not mean just the $200 million tower in downtown Omaha. Impact is making a difference day by day, person by person. Small jobs get the same intentionality as those bigger projects do. Being impactful means that we are making a difference in your life.”

A 100-percent-woman-owned, 100-percent-minority-owned company, Blair Freeman provides a sense of comfortability for clients to ask questions and interact during the process in a supportive environment. “Women have historically been the ones managing the projects at home but then they have to deal with these mansplaining contractors,” Kuhn says with a laugh. “So to be able to call women that relate and feel like you are able to ask questions without feeling like an idiot, that’s relatability.”

A driving force in Blair Freeman’s commitment to do construction differently is transparency as a core value. Mark-ups and fees are straight forward and clearly communicated up front. “We want to make sure people know what they’re signing up for, what our fees and markups are,” Kuhn says. “It’s your project; you should know all the details.”

That honesty, knowledge, experience and relatability gives Blair Freeman an edge on the real estate development side of the business as well. “Knowing construction as in-depth as we do helps us on the owner representation side to be able to run jobs for people from a different angle. A lot of owner reps are from the development perspective and don’t have that whole construction spectrum,” Kuhn says. “I do think that makes us very unique in the market.”

She’s relatively sure Blair Freeman is the only company with construction and owner representation under one roof in Nebraska, but adds they are two separate departments. “Whoever you have watching the construction project should not be building it because there’s no oversight; it’s a conflict of interest,” Kuhn says. Therefore, Blair Freeman hires out architecture firms and construction companies for clients under the owner representation umbrella. “So that’s where we always say collaboration is our biggest strength,” she adds. “Folks that would consider themselves competitors of ours end up working hand in hand with us on the owner representation side. So we build really great relationships with people you would think of as competitors.”

Blair Freeman’s company culture fosters those great relationships. “Karma is treating people the way you want to be treated and that’s from the subcontractors on a job to the CEOs that you encounter every day. You’re going to remember us by how we treated you,” Kuhn says. “There have been times where we noticed the way people treat somebody who is cleaning a toilet and we’re like, ‘no we won’t be working with those folks anymore.’ If you think there’s a difference in how you treat people because of their standing in life then absolutely not.” Kuhn and Adams both repeat “absolutely not” in unison. “There is no way to burn a bridge faster with Blair Freeman than to treat somebody poorly,” Kuhn adds.

“I’ve noticed an energy shift, you see a communication shift when our staff goes in and communicates to people, to subs, to owners, to anybody; that culture shows,” Adams says. “We lead by example.”

That example stretches into mentoring and empowering employees, colleagues from outside the company, other women and girls. “Representation matters. So for us we have a lot of responsibility as Black women in construction to reach back.” Adams says. “Ashley and I always make ourselves available to other women. So if there’s somebody who even mentions the word ‘construction’, we’re like ‘call me.’” They speak at networking events, mentor young women through Girls Inc. programs, Step-Up Omaha and Ace Mentoring Program, and employ around 20 young people as interns for two-month intervals during the summer months. “Mentoring is huge, huge, huge,” she adds.

“For us, mentorship is not just within our company,” Kuhn says. “We get calls from women from other companies all the time with struggles on job sites and in the industry. We help them navigate that historical structure of construction.”

To women considering a career in construction the message is clear. “Don’t be afraid to take that step. There are women like Ashley and me who are a phone call, an email away that are here to support you and that are cheering you on,” Adams says. “It’s not just us; there’s a whole village out here doing that.”