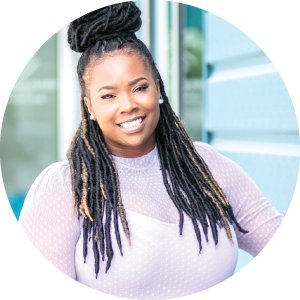 Ashley Jones may be somewhat new to her job as a gang intervention specialist, but she’s been preparing for the role her entire career.

In April 2019, Jones became Omaha’s third gang intervention specialist—a position she says is a partnership between the Omaha Police Department (OPD) and the Boys & Girls Club. She’s also the first woman to take on this unique role, in which she has a badge but is not a police officer.

“I’m more proactive than reactive,” Jones says. “I might have an elementary school reach out because they have kids in second and third grade talking about joining gangs. So, I would visit them and talk about what a gang is, why people join gangs and the risk of being in gangs. The main thing I do is just give them knowledge and tell them this is not the right road for them to go down, even if they may see a family member or someone they know involved in gangs … that just because you’re from this community doesn’t mean you have to be part of it; you can be better and you have a purpose beyond this.”

Prior to her current position, Jones accumulated years of experience working with and mentoring youth in several capacities. She has had various positions at the Boys & Girls Club since starting there in February 2006, culminating in a role as teen director at the Westside Club. She also worked in Omaha Public Schools as a paraprofessional and behavioral interventionist, coached girls’ basketball at Benson High School, and served as coach and supervisor for the Step-Up! Omaha employment program.

When Jones saw that OPD was seeking a female gang interventionist, she discussed the opportunity with a colleague at Boys & Girls Club, who noted the position had much in common with the work Jones was already doing and encouraged her to apply. After her interview, she was excited that the position would allow her the chance to make a more substantial difference in the lives of underserved youth by serving a wider swath of the community.

“I wanted to reach more kids and I just had the urge to do more,” she says. “With this job, I can also follow along with a lot of my kids and make sure they’re still on the right path. This was something I wanted to do because I felt like I could make a bigger impact on a bigger scale, because now I get to move around the city. I can go anywhere from OPS to Millard to Bellevue, and I do get to reach even more kids than I could before.”

In an average week, Jones visits various local schools, organizations like Boys & Girls Club and Girls Incorporated, and community events. She leads small group discussions on topics like social skills and healthy life skills, but she also works one-on-one with individuals whenever needed. While she is mainly focused on proactively preventing kids from ever joining a gang, she says she will work with anyone—from a child that just needs a little extra attention to the occasional known gang member.

“We don’t turn any kids away, because you never know what may resonate with them and change their life and get them on the right path,” Jones says.

As the first woman in her position, Jones was hired in hopes that she could reach girls in a unique way, as they may be more likely to confide in and relate to her. But regardless of their gender, her overall goal is to provide the kids she serves with the quality information, perspective, and tools they need to make good choices. She credits the positive response she gets from youth to her ability to connect with them on a genuine level.

“I think it all starts with building that relationship, that rapport, with kids and letting them know they can trust me and be comfortable speaking with me,” she says.

After nearly 14 years of relationship-building with youth in the community, Jones is always pleased to recognize a child she’s previously crossed paths with—even when that child is now an adult.

“That’s one of the most rewarding things ever, to see some of the kids come back around. Like, if you’ve seen them struggle in elementary or maybe in junior high and a little bit in high school, but they finally figured it out and they’re doing great now, being successful, and just becoming great citizens. That’s what it’s all about for me,” Jones says. “It’s just amazing to see that positive growth and change in a person. I’ve worked with kids who were in gangs already and just changed their whole lives around to see there’s more to life than that. It comes back full circle, too, because kids I have helped, they may want to help others now.”

That positive growth and change—especially those “a-ha moments”—are exactly why Jones does what she does. She says that even as a teen she had a passion for working with kids and has always found it fulfilling.

“When you teach somebody something and they get it, you get to see that excitement on their face,” Jones says. “I just don’t think there’s a better job than being able to work with a person, see them grow confidence, and see them build on that and become successful. You realize you really helped shape this person by letting them know you care and that they have a purpose. And they can just do a complete 180. It’s not overnight, trust me, it’s not overnight, but you get to actually see the process and the change in people.”

Jones, an Omaha native who graduated from North High School before earning her associate degree while on a basketball scholarship at Panola Junior College, was exposed to gang activity in her youth. She credits her parents and engagement in year-round sports and activities with keeping her focused.

“I always had mentors that told me I could become something and I knew I wanted better than that, so I know firsthand how good programs and mentors can make a big difference in someone’s life,” she says.

To make her even stronger in her field, Jones hopes to eventually continue her education in child psychology or social work. She’s also found that many behavior issues can stem from untreated mental health issues and says it’s important to address these in gang prevention efforts.

Jones says the community can help support her and her fellow gang intervention specialists’ work by simply making time to have real conversations with kids and attempting to understand where they’re coming from.

“Kids can get lost,” she says. “There’s a lot of kids lost out here and no one is having these conversations with them. Take the time out to have these conversations with kids. People might think, ‘Oh, they’re just kids,’ but these kids are dealing with real life problems and they’re exposed to a lot now. So, have that compassion for these kids, because a lot of them don’t have the typical things you would assume, like knowing when their next meal is coming or how they are getting to school, or having clean clothes and toiletries—small things we sometimes take for granted. If you can help someone find the root problem of their behavior—instead of just labeling a kid for bad behavior—you never know what positive affect you may have on that kid.”  W

I am so proud of you Ashley, and I pray that the Lord continues to use you to make a differece in the lives of others!