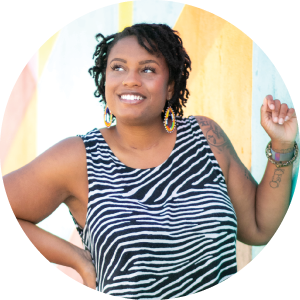 Ashlei Spivey left her North Omaha home at age 17 to pursue her education. By the time she returned at 25, things had changed—but not nearly enough.

“You see the world differently at 25 than you do at 17,” says Spivey. “Growing up, I knew things existed, but I couldn’t put my finger on it. Now I know there were systemic inequities—racism, classism, sexism. Based on my identities, an experience in the world was created for me that didn’t always see my value or create opportunity for me in the same way it did for others.”

Ashlei’s mother, Lisa Spivey, taught her daughter about Malcolm X, who was born in Omaha, and his contributions to the world. “We always talked about what my impact could be,” Ashlei says. “She wanted me to think about how I could make change in my lifetime. She instilled in me that philosophy of giving back, of leaving a place better than it was before.” Her mother’s death is what ultimately led Spivey to return to Omaha to care for her then 12-year-old sister.

Spivey’s experience as an undergraduate student at Jackson State University in Mississippi also had an impact. “Going to a Black college gave me the opportunity to explore my Blackness, and I learned there are many variations— not one narrative—of what that means. I have made this part of my approach to my work.”

Her work takes on many forms—from a nonprofit organization she started, to a foundation she is employed by, to a collective she started with a friend to help Black women grow, connect and give.

Spivey holds a bachelor’s degree in communication, and a master’s in urban social planning. Her first job working for a charter school located in the most disinvested zip code in Dallas, Texas, gave her a front row seat to witnessing systemic inequities.

Back in Omaha in 2016, Spivey grew frustrated with award programs that tend to honor the same types of people over and over again. A mentor challenged her to stop complaining and do something about it.

Spivey developed the Young, Black and Influential (YBI) awards to challenge the narrative of what an influencer looks like. “You don’t have to look or talk a certain way to use your influence or power. You inherently have value and can add value,” she says.

To date, YBI has honored more than 40 people, from youth ages 14 and up to adults in their 40s. “We’ve honored people who were formerly incarcerated, who are living with AIDS, who are entrepreneurs and volunteers,” she says.

Beyond the awards, there is now a cohort of like-minded people who can work together and influence change around a variety of issues, Spivey says. “For example, homophobia is a huge issue in the Black community. So we have created a space where we are saying, ‘You are valued. You have our support.’ We make sure we affirm and lift everyone.”

YBI hosts Influencer Meetups where people can come together casually, as well as Black Influencer Board Training in cooperation with the Nonprofit Association of the Midlands.

“The trainings teach technical skills, like what your responsibilities are as a board member, but also talk about issues like conflict management and soft skills on cultural expectations and what that looks like if you are Black in these spaces,” Spivey says. “For example, if I’m a Black woman and I speak up, do I come off as too loud? We offer support so people feel like they can go into these spaces and have a voice, make an impact. It’s about leading with intent.”

YBI recently shared this curriculum with the Metro Latino Young Professionals Association and plans to work on board placement for members of both groups.

Always interested in working in the nonprofit sector, Spivey is currently a program officer with the Peter Kiewit Foundation. “I have always been intrigued with bringing an equity lens to this work,” she says. “This work adds value to my work at Peter Kiewit Foundation because we are about community capacity.”

Although she thinks Omaha should be further along in this area, Spivey is impressed with the progress our city is making. “I’ve been pleasantly surprised and excited by non-Black identifying people who show up to be partners,” she says. “More people are saying, ‘No, this is not OK.’ They don’t hijack the movement and make it about them. Instead they give resources and ask what I need. This is what creates sustainable change: People who aren’t directly impacted coming together. You see this throughout history.”

These days, Spivey’s 5-year-old son, Naasir, provides constant inspiration for her work. One day a tired, frustrated Spivey started asking herself if all of this hard work is really making a difference. “I was feeling defeated, and then Naasir said, ‘But if you don’t help Black women, who will?’” I took that to heart and stuck with it. Then the other day he said, ‘You know how you work to help Black women? I’m going to do the same for Black boys.’”

That’s when Spivey knew she is having the same impact on her son that her own mother had on her. “This is what keeps me going and grounds me in the work I’m doing. I know this is what I was meant to do,” she says. “Ultimately, I want to keep bringing resources to this work and eventually leave it in a place where others can come in and elevate it.” W

Ashlei Spivey is a POWERHOUSE of a AFRICAN AMERICAN WOMAN! I am so grateful her vision and talents pour into the lives of other African American women/girls in Omaha who choose to follow her journey. She will take you alongside with her and advocate for your every right and that to me is an outstanding legacy move! I cannot wait to see what her son Naasir will do for black boys in Omaha. I will have my son’s join his movement as well!