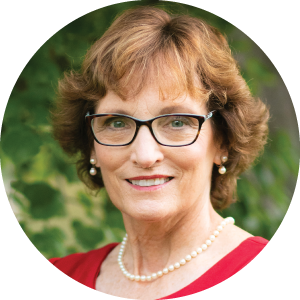 THE POWER OF A HIGHER CALLING

Anne McGuire’s political career began with a phone call from a friend. Interestingly, that phone call was actually for her husband, but it was McGuire who answered the call to seek office on the OPPD Board of Directors.

“Twenty-four years ago, my friend John Green, who was on the board at that time, called me up the day before the deadline [to run],” says McGuire. “He said nobody was running and asked if my husband could run. I said ‘No, he can’t run, but I can.’”

McGuire, presently chair of the OPPD board, was first elected to her seat in 1996. She was re-elected for six-year terms in 2002, 2008 and 2014. McGuire currently represents subdivision 2, which covers a swath of east-central Omaha. In the course of her substantial career on the board she has also served as Chair, Vice Chair, Treasurer and Secretary.

Two women previously served on the OPPD board—Rosemary Skrupa, elected in 1974, and Mary Alice Race, elected in 1978. Their terms even briefly overlapped for six months before Skrupa was appointed to a municipal judgeship. But in all her years there, McGuire was the sole woman on the board—until January 2019, when two more women, Amanda Bogner (subdivision 1) and Janece Mollhoff (subdivision 7), began their terms—marking the most women to ever serve on the eight-seat OPPD board at one time.

“I’ve been by myself the entire time, for 23 years,” McGuire says with a laugh. “We’ve always had good leadership and engagement, but it’s wonderful to have Janece and Amanda on the board now. I’m hoping that more women in these kinds of positions becomes a normal thing from now on.”

McGuire credits increased volume in female elected officials to more energy around women running, plus local programs and initiatives that support women and inspire them to run. In October 2017, she and several other past and present women elected officials participated in the League of Women Voters of Greater Omaha’s biennial Running and Winning workshop. The workshop, hosted in partnership with UNO’s Service Learning Academy, gives local high school students the opportunity to interview the officials and then flex their leadership skills by competing in a mock mini-campaign. McGuire says she loved being a part of the workshop and praises the nonpartisan League of Women Voters of Greater Omaha and similar efforts.

“I think they’ve done a great job trying to make women more comfortable stepping up and running. And I think [programs like this] really make a difference,” she says.

In the same vein, the Women’s Fund of Omaha previously hosted Ready to Run sessions, and Women Who Run Nebraska recently picked up the mantle, offering resources and hosting candidate trainings.

“It wasn’t like this 25 years ago,” McGuire says of the significant uptick in women running for office and being elected. “I think there are more women in office now because more women are running. We have 27 Democratic women just in Douglas County who are public officials right now. Almost 100 years of white women having the right to vote, and now more and more of us are stepping up and saying, ‘Yes, I can do this.’”

McGuire says she’s pleased to see more women running and winning, because it means better representation for all. She’d like to see more people of color elected, too.

“I think it comes down to representation and having women’s views represented. It’s the same thing we need to get across the board: more inclusivity and more representation of what our community actually is.”

This viewpoint aligns well with OPPD’s inclusivity efforts, which McGuire says is a priority.

“It’s a very progressive company and we’re really trying to push inclusivity, because practicing inclusivity means we are better reflecting our community,” she says.

McGuire is proud to note that five out of nine of OPPD’s current senior leaders are women. In addition, McGuire says, the public power giant is also seeking progress in terms of its energy offerings—in direct response to rapid changes in energy and technology.

“We have a really strong, engaged board right now, which is exciting. Things are changing rapidly in energy, so it necessitates a lot of discussion,” she says. “The utility has changed dramatically from when I first started. It used to be just a basic, vertically integrated company. Everything was very steady; no changes. But with the technology boom and awareness of climate change, there are major changes to be made in the industry to help our entire world plus our customers.”

McGuire says being proactive about such changes must be a priority. She cites the need for increased cyber security and business technology, exploring and scaling renewable energy, empowering customers with more individual control over their energy spend and choices about energy sources, and more.

“Now there are multiple choices in various arenas and different avenues to take,” she says. “Some people own electric vehicles now, others don’t. Some people might want solar around their home, other people just want things to stay the same. We want to be very responsive to what customers want and how we can serve them.”

While McGuire says initiatives like individual demand-based rates and affordable battery technology for storing renewable energy are in the 10-year plan, OPPD is already offering forward-thinking initiatives, such as its Cool Smart program, electric vehicle rebates, Smart Thermostat program, Community Solar program and more. A five-year plan to convert all OPPD-served streetlights to LED is currently underway, which increases safety and significantly cuts costs. And by the end of 2019, OPPD expects to be at 40 percent renewable energy.

McGuire is a whiz at rattling off OPPD initiatives and clearly loves her work on the board, but her background is in health care. The St. Louis native earned her bachelor’s degree in nursing from Creighton University and her master’s in nursing from St. Louis University. In her health care career, she worked as an educator, practiced in neuro ICUs and hospice care, and conducted Alzheimer’s research. Her father practiced internal medicine and she recalls occasionally tagging along when he made house calls.

“I come from a medical background and I’m a natural caregiver. I like to take care of people,” she says.

Mother to four adult children and wife to Mike McGuire, M.D., she also currently sits on the GESU Housing Board, the Children’s Physicians Board and the Creighton University Jaybacker Board. She says she has no current plans to pursue other elected positions.

“Considering I’ve been here for 24 years, I’m really happy with what I’m doing,” she says. “I love the changes that have gone on at OPPD and I look forward to continuing to see the changes yet to come.”

Speaking of change, McGuire emphatically urges more women and people of color to run and win elections—and she’s happy to share her advice in support of them.

“Ask questions,” she advises aspiring candidates. “Come and visit me. Go visit with another elected official. Go to “Running and Winning” and [other such programs]. Make sure you aren’t too sensitive because it’s tough; you may get negative ads and that type of thing. You have to be a networker and knock on a lot of doors. And make sure you have your ideas and policies firmly established.” W