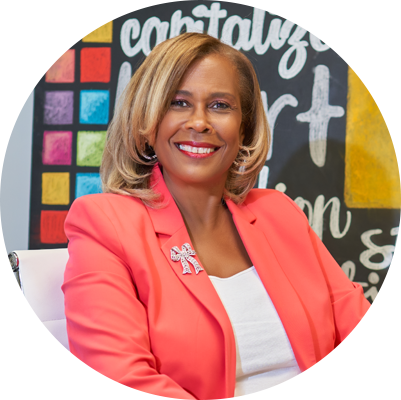 Stepping into a New Role to Elevate Omaha Leaders

Aileen Warren has had a notable career—she most recently was assistant vice chancellor and executive director of human resources for the University of Nebraska Medical Center, and was a former vice president of human resources at First Data Corporation, among other roles—but she’s not past-tense yet.

At a stage when most people are coasting to retirement, Warren recently made a major career change. In January, she became president and CEO of ICAN (Institute for Career Advancement Needs).

Warren wasn’t looking for a career change when she was approached about the top ICAN leadership role, but she was intrigued by the possibilities.

“I was at a point in my life where I still wanted to contribute; I wanted to something that maybe wasn’t as intense… I went ahead and applied, the search committee interviewed me, and the rest is history. And I’m glad I did; I’m really enjoying it,” she says. “I have always worked in the area of human resources and really enjoyed seeing others develop and grow, especially as leaders. I have been a trainer, a boss, and a volunteer on many nonprofit boards, so I am very in tune with many aspects of professional and personal leadership.”

“I love the organization, everything ICAN stands for and everything it does. I want to elevate ICAN in the community and get more people exposed to what we do,” Warren says. “I’m not sure that people know that we’re a nonprofit organization. People are familiar with the ICAN Women’s Leadership Conference, but we also provide custom programming with local companies and we have some specific leadership programs, one for men and one for women.”

Although she’s relatively new to her professional role at ICAN, Warren is no stranger to the organization itself. She’s supported ICAN in various roles for years, including two six-year terms of board service and serving on its executive committee. She’s a graduate of ICAN’s INFLUENCE program, has been a member of the ICAN Leadership Award selection committee, has been a speaker at ICAN events, and was co-chair of the 2010 ICAN Women’s Leadership Conference.

“I knew a lot about the organization and what they stand for and what they’re all about. It’s a great place to be,” Warren says. “We’re going to be celebrating 30 years of our Women’s Leadership Conference May 17, 2023. Our theme is ‘30 years of leading bold conversations.’ We’re really excited about that because we believe ICAN has been on the forefront of raising up the issues of women in the workplace.”

Her vast nonprofit experience most recently includes serving as president of the Women’s Fund of Omaha board of directors and on the executive committee for the Omaha Home for Boys board of directors. She also recently co-chaired the Boys and Girls Clubs of the Midlands 60th Anniversary ON THE ROAD event, which raised over $1 million.

Fundraising as a day-to-day activity is something new, however.

“I’m working for a nonprofit organization. That’s definitely different for me,” she says. “I’ve done (fundraising) in the nonprofit world as far as some of my volunteer experience, but I’ve never had to do it as part of my job. That’s probably one of the biggest changes for me.”

Another shift is that instead of serving on the board of directors, Warren now works with the board from the organizational leadership side. Having been in their shoes, she says she has high expectations and has made a point to meet with board members individually to discuss how they want to and can best contribute.

“It’s making sure everyone is having an engaging experience and a good experience,” she says. “If you’re a board member, that doesn’t mean just showing up to meetings.”

Warren has high expectations for the organization, too: “To reach more individuals via our annual Women’s Leadership Conference, increase participation in our leadership programs and to increase the number of people of color who are exposed to the ICAN experience.”

As a female business leader, Warren says she’s seen more of her peers join the ranks, but that “women in leadership is still an issue.”

“I’m sure that the numbers could be vastly improved. That’s why we have the Women’s Leadership Conference, to get a focus on some of the issues women face in the workplace. And one of our goals is to try to get more men to come to the conference,” she says. “The speakers we have and the topics that we talk about, anyone can benefit from and learn. But women’s leadership development is very, very important to ICAN.”

Leadership development is useful at any stage in a person’s career, Warren says.

“I think sometimes people aren’t their authentic selves when they start out. Some people play a role in terms of what an organization expects you to be versus who you what to be,” she says. “I think that’s one of the things ICAN is all about, helping a person understand what their values are, how they want to live their life and based on that, how does that match up with their career. ICAN really gets people in tune with their authentic self and who they want to show up as, who they want to be, understanding what they’re all about and how that’s going to play out.”

The earlier this is discovered the better, she says, “but don’t get me wrong, it’s never too late.”

Warren says she herself is a great example of this: “With this job, I still feel there’s a lot I can contribute based on my career and experience and what I’ve gone through. And being able to reach back and help others, I feel that’s so important.”

Outside of enjoying time with her young grandsons, Warren says she doesn’t have a hard plan for what’s ahead of her.

“Honestly, I have not thought about what is next. I am very much enjoying my current opportunity. You just kind of ride that roller coaster of life. And sometimes it takes you places you never even thought about. That’s what I’ve tried to do with my life: be open to those opportunities.”