HR Professional Aileen Warren is Guided by Her Authentic Self 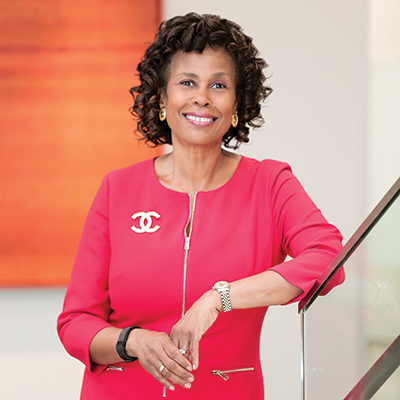 People measure success in different ways. For Aileen Warren, Assistant Vice Chancellor and Executive Director of Human Resources for University of Nebraska Medical Center (UNMC), it’s all about living up to your own values and priorities. “One of the things I feel passionate about is being your authentic self, “Warren says. “Be who you are no matter what environment you are in.”

Warren has followed this thread throughout her career. She discovered a passion for the world of social work during her undergraduate years at the University of Nebraska Omaha (UNO). “It’s about being able to meet people where they are and help them progress in their lives no matter what that looks like, whether it’s from unemployment standpoint or a personal struggle of some sort,” she says. She earned both her undergraduate and graduate degrees in social work from UNO.

A defining moment for Warren in her career was her choice to step into the private sector from non-profit after eight years. She accepted a position as training specialist at First National Bank of Omaha.

“That was my entry into corporate America, “she says. She and her husband, Thomas Warren, were ready to start a family and both worked a lot of evening hours. He was a police officer on patrol and she was a family counselor. “So I needed more standard, consistent daytime hours,” she says. “That’s when I got my first taste of human resources. I loved the whole aspect of empowering people to be their best.” Warren was responsible for the organization’s management trainee program, dealing primarily with people coming straight out of college. “I loved to see their growth in terms of where they started,” she adds with smile. Many of those people are now vice presidents or senior vice presidents, still at First National or business owners around town. “It makes you feel good to know that you made an impact on someone else’s life, no matter how small,” she says.

Warren stayed at First National Bank of Omaha seven years, then worked at World Com briefly before moving on to First Data, where she made her career home for 17 years. “First Data was a great place for me as far as growth opportunities because it was a really fast growing company,” she says. “You could take on a multitude of projects. You just felt like you could do almost anything that you wanted to do. And so I grew a lot there. That’s where I started as a human resource manager and then became a director and then ultimately became a vice president in the organization.”

She attributes much of her success to the size of the company and availability of opportunities. “And I think the other part of that is that I just had some really good managers and people who believed in me, who were willing to challenge me and provided the opportunity,” she adds. Warren accepted her current position at Union 2014.

“I think the key for anybody to be successful is to develop your brand early onion terms of what you’re going to be known for,” Warren says. “I truly believe that throughout my career I have been known as a hard worker, as someone who’s dedicated to the craft and as someone who is dependable. For me that was important. I’m also a good team player and a good communicator.”

Besides engagement on the job, Warren has also been dedicated to giving back. She went through the Leadership Omaha program sponsored by the Greater Omaha Chamber years ago. “It helped me in terms of understanding the role of a community leader,” she says. “I took that very seriously and based on that I’ve been able to serve on various boards of directors and be involved in various community projects. “Serving on community boards and continuing to work hard and be true to herself, Warren successfully built a network of colleagues and friends. “I think that’s what it’s all about it,” she says. “The whole idea of strategic relationships and being involved in your community personally and professionally. Networking has been how I’ve gotten all of my jobs.”

In that light, Warren considers its privilege to mentor others. “I’m always willing to take the time because others did it for me. It’s important to always give back.” Advice she gives to others is to be open to new opportunities and believe in yourself and your skills. “Being a life-long learners so important,” Warren adds. “I will never think I know it all. I will always continue to read, learn and develop. Whatever your craft is, it’s important to continue to develop.” W