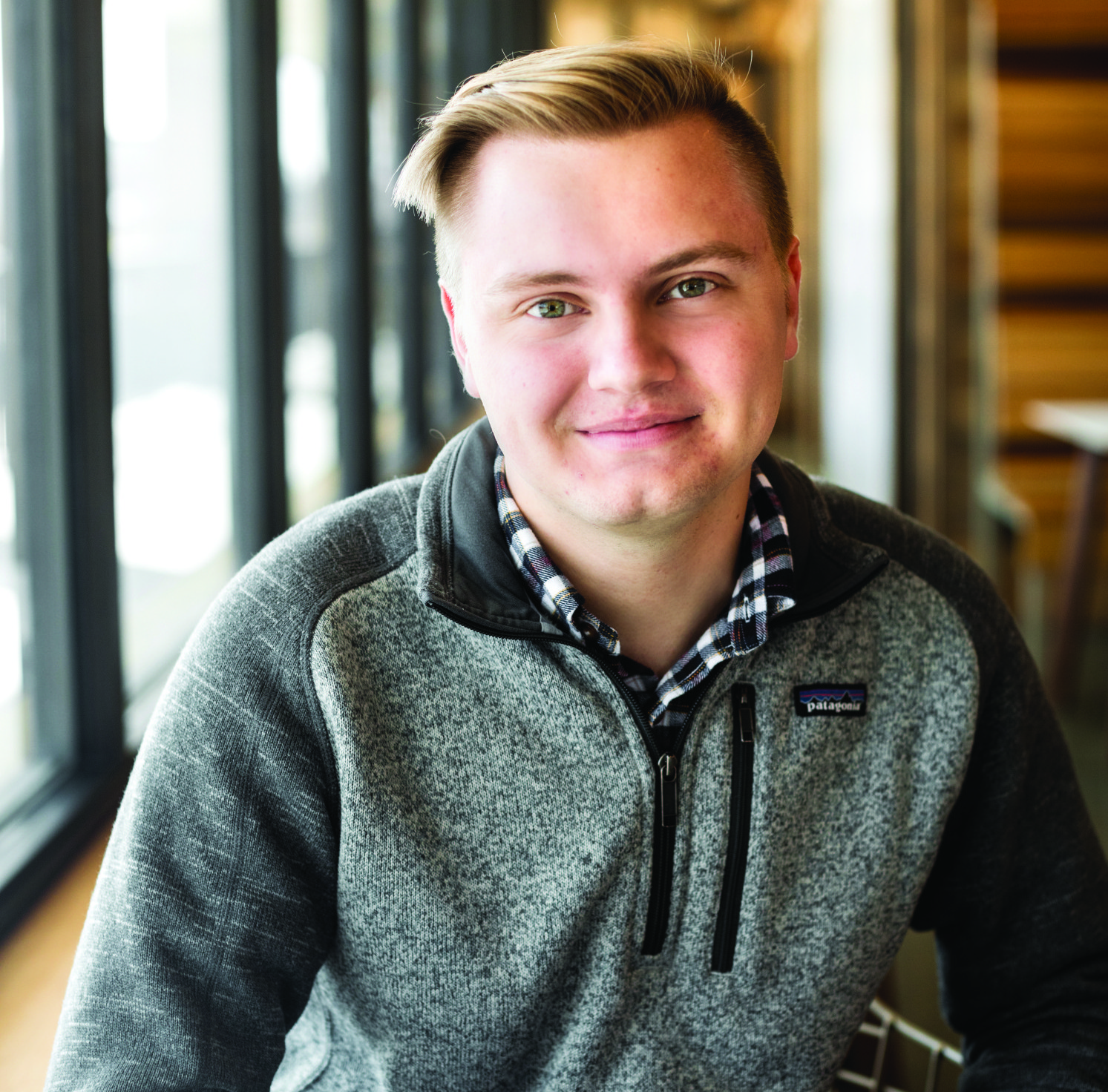 CHANGING THE NARRATIVE AROUND “YES” AND “NO”

When explaining the concept of affirmative consent for sex, Nebraska State Senator Patty Pansing Brooks likes to refer people to two clever British-made videos. The first is a 2017 “Tracey Ullman’s Show” sketch featuring the comedian playing a police detective taking a report from a man who has just been mugged.

The conversation quickly becomes a grilling, with Ullman’s character suggesting the man’s appearance is “provocatively wealthy” and a counselor who joins the interrogation demanding to know why the victim didn’t scream for help at knifepoint. A studio audience chuckles at the absurdity of the situation.

The second video, from a 2015 awareness campaign, presents animated stick figures and messaging using tea as an analogy for sex: Don’t force tea on someone who is unconscious, for instance. And if someone agreed to tea and then changed his or her mind, the decision is ‘no.’

Both pieces are played for laughs, but they deliver strong messages about the irrationality of a blame-the-victim mentality, and how recognizing clear consent should be abundantly simple. Pansing Brooks says it’s equally simple to understand why she introduced LB 988 to adopt an affirmative consent standard with respect to sexual assault.

“I think the current standard is very confusing,” she says. “Bobbie Villareal (former executive director) of the Dallas Area Rape Crisis Center explained it perfectly: ‘Rape is the only crime in which we turn the lens onto the survivor, the victim, and not onto the perpetrator. When someone gets shot, we don’t ever ask them, ‘Why didn’t you get away from the bullet?’”

Silence or lack of resistance, in and of itself, does not demonstrate consent. The definition of consent does not vary based upon a participant’s sex, sexual orientation, gender identity or gender expression.’ He went on to say, ‘It is still the case in many jurisdictions today that a mere lack of consent is insufficient to establish rape.’”

College student Miranda Melson, who testified at the hearing for LB 988, said the current legal standard left her unable to get justice as a victim of rape. “During the summer of my sophomore year of college, I was on a date with another student who I met on Tinder, but instead of getting coffee I was raped in his apartment,” she says.

She filed a Title IX sexual violence report, and the response concluded: The greater weight of the evidence shows the parties engaged in consensual sexual activity. During the parties’ sexual interaction, you did not inform Respondent through words or actions you did not consent to the sexual activity. Therefore no sanction is deemed appropriate or necessary.

However, Melson reported that, not only did she never give consent for sex, her rapist never sought it. “My rape was dismissed because I did not say ‘no’ explicitly. The burden was put on me to defend myself when I was alone and terrified. Following the assault, I began to blame myself for not doing enough to stop him from raping me.

The finding that he did not violate the University’s policy, which was modeled after the Nebraska consent law, dismissed my trauma and institutionally confirmed that it was my responsibility to not be raped,” she says. “My Title IX investigation has been closed for a couple years now and it will not be affected by the proposed bill, however, I fight for the other victims. Affirmative consent could have prevented my rape or provided the justice to educate my rapist.”

The horrific experience still haunts her, Melson says. “My rapist still goes to school with me and was not charged with anything. Being asked for consent is a fundamental human right that everyone is entitled to and no one should experience what happened to me.”

Unfortunately, it does happen to others. Brodey Weber, a University of Nebraska-Lincoln sophomore, said a female friend confided in him that she had been raped by an acquaintance and had been afraid to resist.

“The reason she didn’t report it is because she didn’t say ‘no.’ She froze and was unable to properly say ‘no.’ But she never said ‘yes.’” Weber says. “It really broke my heart. She is one of my very best friends. She is the first person I’ve personally met that experienced this but I can’t tell you since crafting this bill how many people I’ve have heard from who felt victimized but didn’t feel they could seek their justice because they didn’t say ‘no.’” Weber played a big part in bringing LB 988 to life. Following an academic project on gender and communication, the former intern—he worked in Pansing Brooks’s office during her first term in 2016—approached the senator late last year as with the idea for a new bill.

“The topic I spent the entire semester studying was affirmative consent policies and what they look like in different states,” he says, Weber’s interest in the issue actually started a few years earlier. At a Young Democrats convention he attended in California as a high school student, Weber heard a presentation by the then-president pro tempore of the California State Senate, Kevin de León, who was the first in the nation to introduce a “yes means yes” bill. California passed the bill into law in 2014 and four other states have followed suit. Many others are reviewing proposed legislation.

“I think the reason we see it passing in so few states is that it is really a new idea for a lot of people who aren’t aware of the problem the current standard creates,” Weber says. “It’s so passive. It assumes that everyone is ready for sexual activity until they say ‘no.’ I don’t think it’s too much for us to ask that when individuals are about to engage in such an intimate act, they both are clearly expressing their desire and willingness to do so.”

Weber provided his research to Pansing Brooks and her staff and shared his insight as the bill took shape. “Through an entire semester I was able to get a lot of good research and information on what works and doesn’t work, so I was able to answer questions on what this might look like in Nebraska,” he said. LB 988 was read for the first time in January.

“Democracy is not a spectator sport. I came to the realization that if I wanted to see the change I had to be the change,” Weber says. “The reason the time was right was that I was sick and tired of waiting for someone else to do it.”

“Now is the time to act and support affirmative consent,” Melson says. “The public is watching rapists and sexual harassers in the workplace being held accountable through the #MeToo campaign. Senator Patty Pansing Brooks’ bill to adapt affirmative consent, LB 988, can prevent these stories from recurring and protect people who do not have the power to speak up.

We cannot allow victims to be silenced or face the blame after they have just been raped. Rape is the most underreported crime and this issue will not stop on its own. The law is responsible for establishing the standard that declares rape is not permitted in Nebraska.”

Affirmative consent standards would benefit everyone, Pansing Brooks says. “It helps people understand healthy relationships. We all want to feel love and be loved, and there may be a sexual part to that relationship. Let’s focus it on making it beautiful, not violent and abusive,” she says, adding that respect promotes “understanding of what both parties want.”

“When we talk about consent, it involves all gender identities, and when we talk about sexual assault we have to understand it’s a wide range of individuals, so it’s not just an issue for women, it’s an issue for everyone,” Weber says. “What this bill targets is individuals who were unable to offer enthusiastic, ongoing and clear consent with the other individual who engaged in that sexual activity. If they were unable to express that, then they were violated and they should have that ability to go after that individual to get the justice they are entitled to.”

Nuances would be eliminated under affirmative consent standards, Melson says. “(It) changes the attitudes and the norms about how people talk about consent, from ‘How did you hear the no?’ to ‘How did you hear the yes?’ While ‘no means no’ has become a well-known slogan, it places the burden on the victims, making it their responsibility to show resistance. ‘Yes means yes’ is based on enthusiasm and ongoing dialogue.

However—as of now—silence, passivity and a lack of strong resistance is considered giving consent,” she says. “Affirmative consent is not to punish people caught in seemingly ambiguous situations, but to prevent these situations from being ambiguous in the first place. It rejects traditional gender scripts, with men as the pursuers and women as the gatekeepers of sex. Affirmative consent requires and encourages equal agency for all genders. ‘Yes means yes’ could spark a cultural shift in how people think about consent and bodily autonomy.”

Pansing Brooks, a parent to three, says education about consent can start in childhood with a “your body is your own” concept emphasizing that the right applies to everyone else, too. Weber says he remembers a “yes means yes” message from sex education classes in school.

“I don’t quite know if my generation is better informed on consent issues, but I really hope so and I’m working to make sure they are. And I care about future generations being more informed about consent issues,” he says. “My parents taught me to do right by what I would want for my little sister. I would do anything to protect her. I really do want to create a culture where my little sister feels protected, safe and comfortable to speak up if her safety is violated.”

Affirmative consent also emphasizes communication, advocates say. “It’s claiming your space and your power about what will happen to you. If somebody wants to interact with you, then they better comply with how you expect to be treated,” Pansing Brooks says. “A lot of problems in society are all about a lack of communication. It’s highly epitomized in this issue.”

Melson agrees. “Affirmative consent would encourage people to learn how to communicate during sex. We have advanced in learning about birth control and STI (sexually transmitted infection) prevention in sexual education, but we also need to be teaching how to recognize if someone wants to have sex. Sex is better if everyone is excited and consenting,” she says.

“Some may argue that consent is too complicated, but they have not taken the opportunity to learn about it. Consent is simple: a verbal, enthusiastic, freely given and conscious decision to engage in sexual activity. Affirmative consent would not only provide justice after an assault but could prevent it through education.”

And in cases where consent is uncertain? “If you’re that confused about what consent is, then you should stop,” Pansing Brooks says. LB 988 did not pass in the 2018 legislative session, but regardless the underlying issue isn’t going anywhere.

“There will be a day when affirmative consent legislation is passed in the state of Nebraska,” Weber predicts. “Senators will be hearing from me every single year until this bill is passed and put into law. I will not back down.” “I will be bringing it back,” Pansing Brooks says. W

Check out these websites