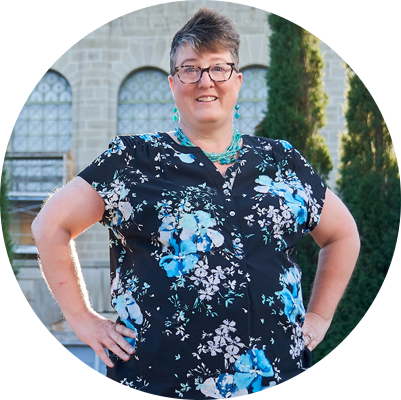 Pushing Boundaries for Inclusion Across the State

Social work and social justice have gently tugged at Abbi Swatsworth’s heart for more than 20 years. That distinct pull of service stems from Swatsworth’s studies in social work at the University of Nebraska at Omaha, where she enrolled as a nontraditional student to improve her life as a then-single mother.

While earning a bachelor’s degree, she discovered avenues to lend her support through a more systems-focused approach, as opposed to working directly with individuals or families.

Swatsworth’s story of how she was hired as executive director of OutNebraska in early 2019—and how her childhood experiences brought the opportunity full circle—dates back to her upbringing. As a child, Swatsworth’s family moved around the United States. When her parents separated, she moved to a small community in Kansas.

Just how small? Her graduating class totaled only 47 students.

She eventually found her home in Nebraska, where she has lived for more than 30 years. Moving throughout small Midwest communities, Swatsworth says, provides her a unique perspective on working with towns of all sizes throughout the state.

As a statewide nonprofit organization based in Lincoln, OutNebraska serves all of Nebraska through education and advocacy for the LGBTQIA+ community.

She engaged with OutNebraska first as a volunteer and, later, as a board member. When OutNebraska began the transition from an all-volunteer organization to one with paid staff, Swatsworth felt the pull to apply as its first executive director.

She was hired in January 2019, growing the work beyond the Lincoln area to become a statewide organization supporting the LGBTQIA+ community.

As one might imagine, the work is not always easy— especially in a state often pegged as highly conservative.

But Swatsworth is quick to refine that narrative: “Nebraska is conservative, but I think that tends to come from an elected-official perspective. The people of Nebraska are much more progressive on an individual level in regard to the LGBT community. Everyone knows someone who is a member of our community.”

In recent years, Swatsworth has been inspired by initiatives, programs and the like popping up across Nebraska. She points to the tri-city areas of Grand Island, Kearney and Hastings. PFLAG (Parents and Friends of Lesbians and Gays) Chapters have been created in each city. The University of Nebraska of Kearney was recently named a top college for LGBT students. And in Norfolk, the second annual pride parade took place earlier this year, with vast support from the community.

“There are pockets in Nebraska where good things are happening,” Swatsworth explains. “I want to believe it’s because OutNebraska is pushing the visibility of such efforts.”

Last year alone, OutNebraska engaged with more than 1,300 individuals through educational sessions around Nebraska. “That tells me there are groups interested in being more inclusive, who see that as of value for their HR departments and their DEI (Diversity, Equity and Inclusion) work,” she says.

However, local news headlines and personal stories from throughout the state are evidence that the work of supporting this key community is far from finished. “Somehow (the LGBTQIA+) community has become politicized,” Swatsworth explains. “Just talking about queer folks is somehow a political statement. And it’s really not.

“We exist as human beings. We always have. There have been queer and gender expansive people since the beginning of time— since there were people. Sometimes it makes me sad that it has become what it has become.”

The solution for a more unified, more supportive, more accepting state for LGBTQIA+ individuals has many facets. Education and advocacy work are strong starts and can occur in communities large and small across Nebraska’s expansive counties.

But an even more individual approach could make sizable changes, one heart at a time.